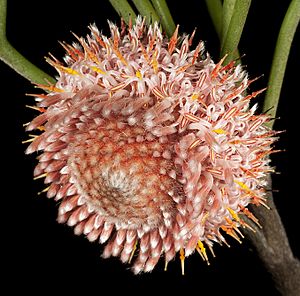 Isopogon teretifolius, commonly known as nodding coneflower, is a species of flowering plant in the family Proteaceae and is endemic to the southwest of Western Australia. It is an erect shrub with cylindrical, sometimes branched leaves, and flattened-spherical heads of hairy pinkish flowers.

Isopogon teretifolius is an erect shrub that typically grows to a height of 0.5–2 m (1 ft 8 in–6 ft 7 in) and has hairy, pale to greyish-brown branchlets. The leaves are cylindrical, 25–100 mm (0.98–3.94 in) long, sometimes pinnately divided, the leaf and segments 1.5–2 mm (0.059–0.079 in) wide with a sharply-pointed tip. The flowers are arranged on the ends of branchlets in sessile, flatened-spherical, sometimes dropping heads 25–40 mm (0.98–1.57 in) in diameter with hairy, reddish brown, egg-shaped involucral bracts at the base. The flowers are hairy, creamy pink, pale pink or white tinged with pink, and up to 15 mm (0.59 in) long. Flowering occurs from August to November and the fruit is a hairy nut, fused with others in a flattened-spherical to conical head 20–25 mm (0.79–0.98 in) in diameter.

Isopogon teretifolius was first formally described in 1810 by Robert Brown in Transactions of the Linnean Society of London. The specific epithet (teretifolius) means "terete-leaved".

This isopogon is classified as "not threatened" by the Government of Western Australia Department of Parks and Wildlife.

All content from Kiddle encyclopedia articles (including the article images and facts) can be freely used under Attribution-ShareAlike license, unless stated otherwise. Cite this article:
Isopogon teretifolius Facts for Kids. Kiddle Encyclopedia.