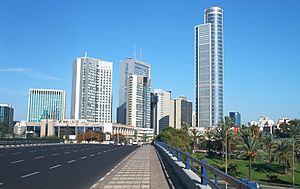 The Diamond Exchange District in Ramat-Gan 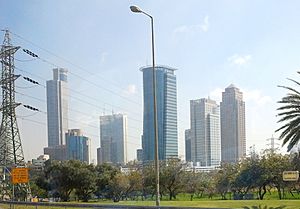 Israel Diamond Exchange Ltd., located in Ramat Gan, near Tel Aviv, Israel, is the world's largest diamond exchange. The exchange is a private company that incorporates about 2800 diamantaires members, which are engaged in diamond trading, cutting, marketing, brokerage, import and export.

The exchange operates from a complex of four buildings in area known as the Diamond Exchange District; the buildings are connected by bridges creating one complex, which contains the world's largest diamond trading floor; consisting of 1000 office rooms, restaurants, banks, post, and package delivery services.

The first diamond cutting facility in Israel was opened in 1937, the industry grew over the next 30 years and by the 1960s a trade association was established, which later evolved into the Diamond Exchange.

All content from Kiddle encyclopedia articles (including the article images and facts) can be freely used under Attribution-ShareAlike license, unless stated otherwise. Cite this article:
Israel Diamond Exchange Facts for Kids. Kiddle Encyclopedia.