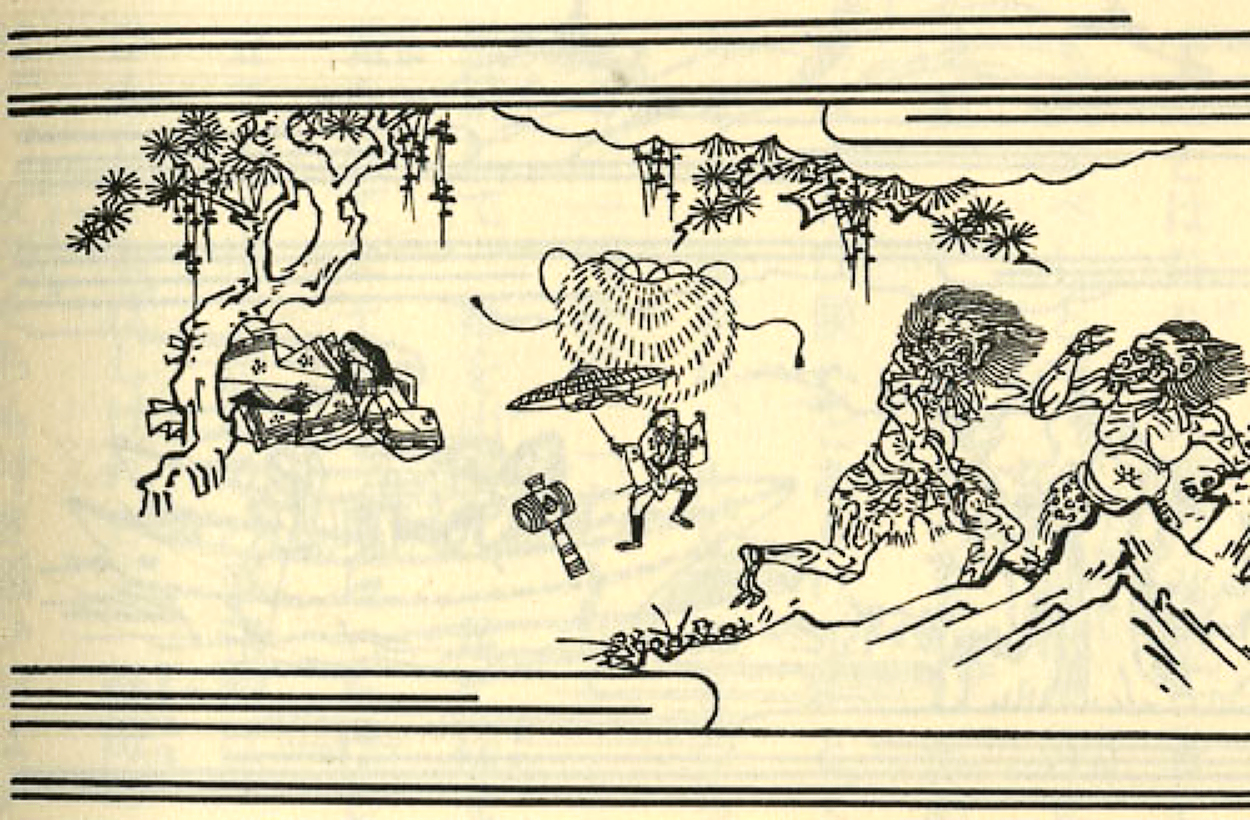 Issun-bōshi (一寸法師, "One-Sun Boy"; sometimes translated into English as "Little One-Inch" or "The Inch-High Samurai") is the subject of a fairy tale from Japan. This story can be found in the old Japanese illustrated book Otogizōshi. Similar central figures and themes are known elsewhere in the world, as in the tradition of Tom Thumb in English folklore. 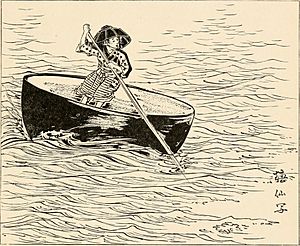 Issun-bōshi going down the river in a bowl

The general story is:

However, the version of the story written in the Otogi-zōshi has a few differences:

A version where Issun-bōshi strategized to marry a rich person's daughter is recorded in the Shinkoku Gudo Zuihitsu of the Edo period. Other documents record similar tales:

There are also many differences in the tale depending on the region where it is told.

There are many other versions of the story Issun-bōshi, but there are some that seem to take on a completely different story of their own, and have stayed that way since their new retellings. These versions include the story of Mamasuke, the adult version of Issun-boshi, and the modernized version that are seen worldwide today.

The Mamesuke version of Issun-bōshi is essentially the same, except for a few key defining factors. Rather than being born from his mother's womb, Issun-boshi was born from the swelling of his mother's thumb. He was also called Mamesuke, which means bean boy instead of Issun-bōshi, even though the story is still called Issun-bōshi. He does still set out on his own at some point, but instead of being armed with a sewing needle, bowl, and chopsticks, all he has is a bag of flour. He eventually finds his way to a very wealthy wine merchant who has three daughters. Mamesuke wishes to marry the middle daughter, so he begins to work for the merchant and live there. One night, Mamesuke takes the flour he has and wipes it on the daughter's mouth, then throws the rest into the river. In the morning, he pretends to cry because his flour is gone, so the family investigates as to where it went when they discovered the flour on the middle daughter. She gets upset because she had nothing to do with the flour, but her family turns her over to Mamesuke as payment. He then begins to lead the girl home to his parents, while along the way the girl is so angry that she tries to find ways to kill him, but she could not find one. When Mamesuke returned home, his parents were so delighted with the girl that they set up a hot bath for him. Mamesuke got in and called for his bride to help him wash, but she came in with a broom instead and stirred up the water in an attempt to drown him. Mamesuke's body suddenly burst open, and out stepped a full sized man. The bride and parents were surprised yet extremely happy, so Mamesuke and his bride lived happily with his parents.

The modernized version of Issun-bōshi is very similar to the original, except there are different happenings that make it more universally acceptable. Rather than setting out on his own, Issun-bōshi's parents send him off to learn about the world on his own. He still travels to the capital and ends up in the home of a wealthy lord, but rather than his daughter disliking him, she immediately fell in love with him, as well as the other residents of the lord's home. Issun-bōshi and the girl still get attacked by ogres and obtain the lucky mallet, which is then used to make him normal sized. He grows into a fine young samurai, but it was never made clear where Issun-bōshi went from there. This abrupt ending is set up so that the audience can make their own guesses about what happened to Issun-bōshi.

In the 8th Season of Yami Shibai, Episode 07, Issub-bōshi is described as a creature which, when offended or provoked, can go inside a human body and as punishment turn it into a grotesque one, with large lumps sprouting randomly. He can also order the affected human to do evil things such as killing a person or in it's words "punishing" them. The affected human won't be able to disobey said order and will forever succumb to Issub-bōshi's curse.

All content from Kiddle encyclopedia articles (including the article images and facts) can be freely used under Attribution-ShareAlike license, unless stated otherwise. Cite this article:
Issun-bōshi Facts for Kids. Kiddle Encyclopedia.