Kids Encyclopedia Facts
This page is about a character in English folklore. For other uses, see Tom Thumb (disambiguation).

Tom Thumb (Welsh: Bawd Tom) is a character of English folklore. The History of Tom Thumb was published in 1621 and was the first fairy tale printed in English. Tom is no bigger than his father's thumb, and his adventures include being swallowed by a cow, tangling with giants, and becoming a favourite of King Arthur. The earliest allusions to Tom occur in various 16th-century works such as Reginald Scot's Discovery of Witchcraft (1584), where Tom is cited as one of the supernatural folk employed by servant maids to frighten children. Tattershall in Lincolnshire, England, reputedly has the home and grave of Tom Thumb.

Aside from his own tales, Tom figures in Henry Fielding's 1730 play Tom Thumb, a companion piece to his The Author's Farce. It was expanded into a single 1731 piece titled The Tragedy of Tragedies, or the History of Tom Thumb the Great.

In the mid-18th century, books began to be published specifically for children (some with their authorship attributed to "Tommy Thumb"), and by the mid-19th century, Tom was a fixture of the nursery library. The tale took on moral overtones and some writers, such as Charlotte Mary Yonge, cleansed questionable passages. Dinah Mulock, however, refrained from scrubbing the tale of its vulgarities. Tom Thumb's story has been adapted into several films. 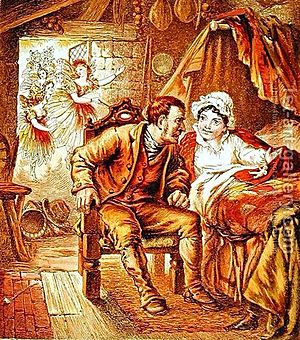 The Queen of the Fairies attends the birth of Tom Thumb

Richard Johnson's The History of Tom Thumbe of 1621 tells that in the days of King Arthur, old Thomas of the Mountain, a plowman and a member of the King's Council, wants nothing more than a son, even if he is no bigger than his thumb. He sends his wife to consult with Merlin. In three months time, she gives birth to the diminutive Tom Thumb. The "Queene of Fayres" and her attendants act as midwives. She provides Tom with an oak leaf hat, a shirt of cobweb, a doublet of thistledown, stockings of apple rind, and shoes of mouse's skin.

Tom cheats at games with other boys and because of his many tricks, the boys will not associate with him. Tom retaliates by using magic to hang his mother's pots and glasses from a sunbeam. When his fellows try the same, their pots and glasses fall and are broken. Thereafter, Tom stays home under his mother's supervision. At Christmas, she makes puddings, but Tom falls into the batter and is boiled into one of them. When a tinker comes begging, Tom's mother inadvertently gives him the pudding containing her son. The tinker farts while crossing a stile, but Tom calls out about the farting and the frightened tinker drops the pudding. Tom eats himself free and returns home to tell his mother and father of his adventure.

His mother thereafter keeps a closer watch upon him. One day, he accompanies her to the field to milk the cows. He sits under a thistle, but a red cow swallows him. The cow is given a laxative and Tom passes from her in a "cow turd". He is taken home and cleaned. Another day, he accompanies his father for the seed sowing and rides in the horse's ear. Tom is set down in the field to play the scarecrow, but a raven carries him away. His parents search for him, but are unable to find him.

The raven drops Tom at the castle of a giant. The cruel giant swallows the tiny boy like a pill. Tom thrashes about so much in the giant's stomach that he is vomited into the sea. There, he is eaten once more by a fish which is caught for King Arthur's supper. The cook is astonished to see the little man emerge from the fish. Tom then becomes King Arthur's Dwarf.

Tom becomes a favorite at King Arthur's royal court, especially among the ladies. There is revelry; Tom joins the jousting and dances in the palm of a Maid of Honour. He goes home briefly to see his parents, taking some money from the treasury with the king's permission, then returns to court. The Queene of Fayres finds him asleep on a rose and leaves him several gifts: an enchanted hat of knowledge, a ring of invisibility, a shape-changing girdle, and shoes to take him anywhere in a moment.

Tom falls seriously ill when a lady blows her nose, but is cured by the physician to King Twaddell of the Pygmies. He takes a ride in his walnut shell coach and meets Garagantua. Each boasts of his many powers. When Garagantua threatens to harm Tom, he is cast under an enchantment and Tom hurries home to safety. King Arthur listens with amazement to Tom's many adventures.

Richard Johnson's 1621 narrative ends here, but he promised his readers a sequel that has never been found, if published at all. In 1630, a metrical version in three parts was published that continues Tom's adventures.

Other versions paint a different picture to Tom's end. Dinah Mulock continued the tale and noted that Tom exhausted himself with jousting but recovered in Fairyland. When he returned to Arthur's court, he accidentally landed in a bowl of the king's frumenty. Tom enrages the cook and is threatened with beheading. He seeks refuge in the mouth of a passing slack-jawed miller. Sensing tiny voices and movements within him, the man believes he is possessed. He yawns and Tom emerges, but the Miller is so angry he tosses Tom into a river where he is swallowed by a salmon. The fish is caught, taken to the King's kitchen, and Tom is found and kept in a mousetrap until King Arthur forgives him. 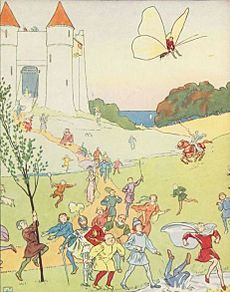 The court goes hunting and Tom joins them upon his steed, a mouse. A cat catches the mouse and Tom is injured. He is carried to Fairyland where he recovers and dwells for several years. When he returns to court, King Thunston now reigns. Charmed by the little man, the king gives Tom a tiny coach pulled by six mice. This makes the queen jealous as she received no such gifts and she frames Tom with being insolent to her. Tom attempts to escape on a passing butterfly, but is caught and imprisoned in a mousetrap. He is freed by a curious cat and once more wins back the favor of King Thunston. Sadly, he does not live to enjoy it as he is killed by a spider's bite. Tom is laid to rest beneath rosebush and a marble monument is raised to his memory with the epitaph:

Here lies Tom Thumb, King Arthur’s knight,
Who died by a spider’s cruel bite.
He was well known in Arthur’s court,
Where he afforded gallant sport;
He rode at tilt and tournament,
And on a mouse a-hunting went;
Alive he fill’d the court with mirth
His death to sorrow soon gave birth.
Wipe, wipe your eyes, and shake your head
And cry, ‘Alas! Tom Thumb is dead.

Tom Thumb is the subject of several films.

All content from Kiddle encyclopedia articles (including the article images and facts) can be freely used under Attribution-ShareAlike license, unless stated otherwise. Cite this article:
Tom Thumb Facts for Kids. Kiddle Encyclopedia.