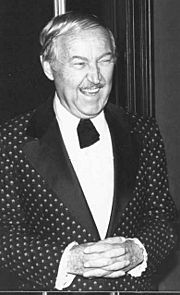 George Pal (György Pál Marczincsak, February 1, 1908 – May 2, 1980) was a Hungarian-American animator, movie director and producer who has helped the movie industry grow during the 50s and 60s. An award is named after him.

Pal was born in Cegléd, Kingdom of Hungary, Austro-Hungarian Empire, (now Hungary). He was educated at the Budapest Academy of Arts. He was married to Elizabeth Zsoka from 1930 until his death in 1980, they had two children. Pal died on May 2, 1980 in Los Angeles, California from a heart attack. He was 72 years old.

All content from Kiddle encyclopedia articles (including the article images and facts) can be freely used under Attribution-ShareAlike license, unless stated otherwise. Cite this article:
George Pal Facts for Kids. Kiddle Encyclopedia.