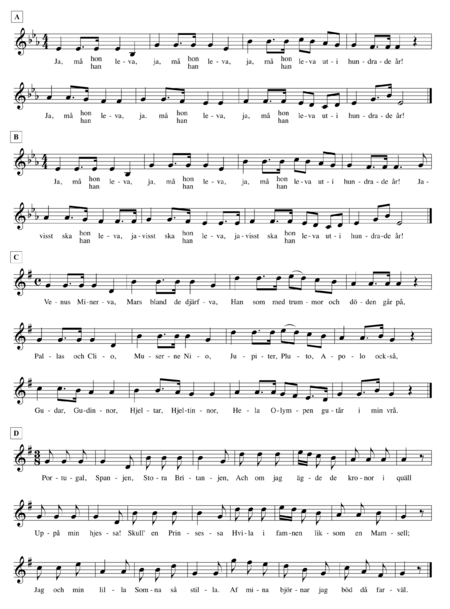 James Massengale states that the melody is of a common 18th century form, used by both Mozart and Haydn, and was therefore well known in Austria at the end of the 18th century.

Carl Michael Bellman uses the melody in different shapes for three different songs. Fredman's song no. 11 (“Portugal, Spanjen”) has the form of a light 3/8 Contra dance while no. 12 (”Venus Minerva”) is a steady march in 4/4. This melody is also used in the song "Högtid beredes och Ganymedes".

In Germany the melody was published in 1877 in a songbook for high schools with the words ”Hoch soll er leben”. In the Netherlands the song "Lang zal hij leven" is used at birthdays. The three first bars of this songs are equal to ”Ja må han leva”.

The three songs by Bellman have all words concerning drinking and feast. The wedding song "Brudgum och bruden vilka i skruden" published in a broadsheet around 1800 is noted to be sung to the melody of "Venus Minerva".

The Swedish Salvation Army published in Stridsropet (The War Cry) in 1884 a hymn "Jesus allena mitt hjärta skall äga" ("Jesus alone shall own my heart") to the melody of ”Venus Minerva”.

All content from Kiddle encyclopedia articles (including the article images and facts) can be freely used under Attribution-ShareAlike license, unless stated otherwise. Cite this article:
Ja, må han (hon) leva Facts for Kids. Kiddle Encyclopedia.