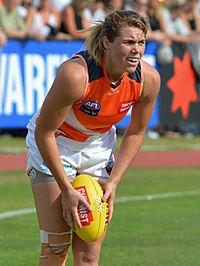 Jacinda Barclay (18 February 1991 – 13 October 2020) was an Australian sportswoman. She played Australian rules football, baseball and American football at high levels. She played for her country in five Women's Baseball World Cups. She also played American football for the Chicago Bliss in the Legends Football League and Australian football for the Greater Western Sydney Giants in the AFL Women's (AFLW). Due to her success across different sports, The Sydney Morning Herald called Barclay "the Sonny Bill Williams of women's sport" in 2016.

Barclay grew up in Chidlow, Western Australia. She died on 13 October 2020 in Chidlow at the age of 29.

All content from Kiddle encyclopedia articles (including the article images and facts) can be freely used under Attribution-ShareAlike license, unless stated otherwise. Cite this article:
Jacinda Barclay Facts for Kids. Kiddle Encyclopedia.