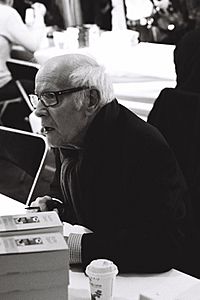 Jacques Chancel, (Joseph André Jacques Régis Crampes; 2 July 1928 – 23 December 2014) was a French journalist and writer. He was known for being the radio host of Radioscope and Le Grand Échiquier for 22 years. Chancel was born in Ayzac-Ost, France.

Chancel died at his home in Paris from cancer, aged 86.

All content from Kiddle encyclopedia articles (including the article images and facts) can be freely used under Attribution-ShareAlike license, unless stated otherwise. Cite this article:
Jacques Chancel Facts for Kids. Kiddle Encyclopedia.