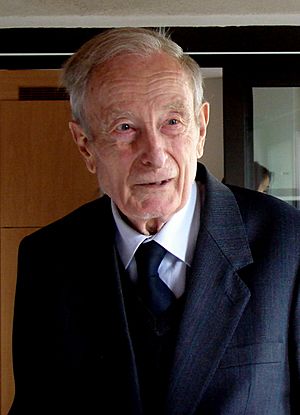 Jacques Friedel ForMemRS (11 February 1921 – 27 August 2014) was a French physicist, educator and material scientist. He was the President of the French Academy of Sciences from 1992 until 1994. He worked at many universities in France. He also wrote more than 200 journal articles.

Friedel was born in Paris. He came from a family of academics. He studied at École Polytechnique from 1944 until 1946.

All content from Kiddle encyclopedia articles (including the article images and facts) can be freely used under Attribution-ShareAlike license, unless stated otherwise. Cite this article:
Jacques Friedel Facts for Kids. Kiddle Encyclopedia.