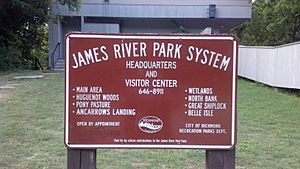 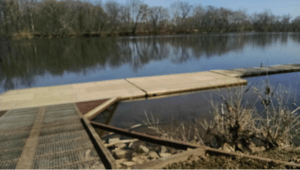 Floating dock on the James River

The James River Parks System (also known as James River Park or simply JRPS) is a 550-acre (220 ha) municipal park in Richmond, Virginia. It consists of multiple sections along the James River between the Huguenot Memorial Bridge in the west to a half mile (0.8 km) beyond the I-95 Bridge over the James in the east. It is a part of the city’s Department of Parks, Recreation and Community Facilities.

JRPS was formed by the City of Richmond in 1972 from a number of private properties that had been donated.

The first property donated was a 380-acre tract obtained and donated to the city in 1966 by scout leader Charles Joseph “Joe” Schaefer. Schaefer had tried in vain to seek permission for his scouts to camp on a James River Island in 1965, and in the process, he and his former VMI roommate sought to find and secure a two-mile tract of river property to donate to the city as a public park.

Ralph White, a former Peace Corps volunteer and National Park Service employee, was hired by the City of Richmond in 1980 as one of several JRPS employees. At the time the river was not in very good condition, owing to littering and years of industrial use of the river White eventually became the manager of JRPS and spent a 32-year career with the city of Richmond, transforming JRPS through advocacy and engaging community groups in volunteer cleanups. In December 2012, White retired and was replaced by Nathan Burrell.

The number of sections of the park have expanded over time. Some sources say there are currently 19 sections. From west to east, sections include the following areas:

This connects to the stretch of the James that runs from Bosher's Dam in the west to Z Dam in the east. It is a perfect place for kayaking, canoeing, and paddleboarding. Nash's Island and Channing's Island, just below Bosher's and just above the Willey Bridge, are good spots to beach and chill. A sandy beach is opposite the Flatwater put in. Other islands are just above Z Dam. The fish ladder in Z Dam is a perfect place for kayaking and for paddle board surfing when the river is high.

All content from Kiddle encyclopedia articles (including the article images and facts) can be freely used under Attribution-ShareAlike license, unless stated otherwise. Cite this article:
James River Park System Facts for Kids. Kiddle Encyclopedia.