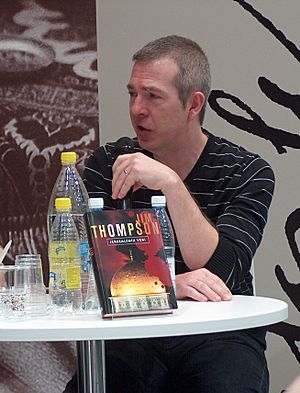 James Thompson at the Helsinki Book Fair in 2008.

James Thompson (16 October 1964 – 2 August 2014) was an American-Finnish crime writer. He was born in Kentucky and grew up in Lahti. He had a master's degree in English philology from the University of Helsinki. He also studied Finnish and was fluent in it. He studied six languages. He published four crime novels with the Finnish inspector Kari Vaara as the protagonist.

All content from Kiddle encyclopedia articles (including the article images and facts) can be freely used under Attribution-ShareAlike license, unless stated otherwise. Cite this article:
James Thompson (author) Facts for Kids. Kiddle Encyclopedia.