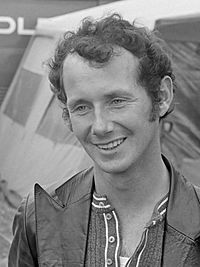 He lost the 1972 world championship to Angel Nieto by the narrowest of margins.

Vries died on 14 January 2021 of cardiac arrest in Purmerend, Netherlands at the age of 77.

All content from Kiddle encyclopedia articles (including the article images and facts) can be freely used under Attribution-ShareAlike license, unless stated otherwise. Cite this article:
Jan de Vries Facts for Kids. Kiddle Encyclopedia.