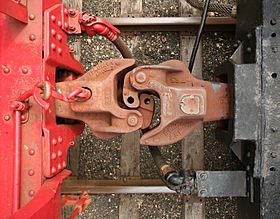 Mated Janney Type E couplers, as seen from above. Left is top-operated on locomotives. Right is bottom-operated on cars

In the UK, several versions of Janney couplers (Alliance, BuckEye|DropHead, TightLock, SwingHead...) are fitted to a limited number of coaches, multiple units, wagons and locomotives.

Prior to the formation of the Association of American Railroads (AAR) these were known as or Master Car Builder (MCB) couplers. In 1934 the MCB was renamed as the AAR.

Knuckle couplers of the 1880s and 1890s had a chaotic mixture of proprietary internal components, but all had the standard MCB external contour, making them compatible. There was a multitude of makes and models — Burns, Climax, Gould, Miller, Sharon and Tower. Some worked better than others.

In 1913, American Steel Foundries (ASF) developed the Janney "Type D" coupler, that was then made the MCB standard coupler for North America; new and rebuilt rolling stock had to be fitted with this coupler. This standard ended the market for knuckle couplers with proprietary components, excepting those exported from the US to other countries not complying with MCB standards.

The Alliance coupler, named after the ASF-owned foundry in Alliance, Ohio, was developed as a lighter build than the "Type D", and was marketed by the Amsted Corporation, parent of ASF, as the "Standard for the World". It is still the most-used knuckle coupler in the world. The modern Alliance coupler still uses the modern AAR-10 or 10A contour, but has a shorter thus weaker head length, and thus cannot be used on North American interchanged rolling stock.

The external contour of Janney knuckle couplers was the first aspect to be standardized by the MCB in the 1880s. Prior to this, there was a chaotic variety of constantly evolving and proprietary external contours and internal components. In 1893, manufacturers standardized on the MCB-5 or Type C contour, then in 1915 on the improved MCB-10 or Type D contour, and again in 1932 on the AAR-10A or Type E contour. The 1893, 1915, and 1932 contours are measurably different with slight dimensional changes that improved performance, yet remain compatible. Janney couplers still use the 1932 contour, though tolerances, metallurgy and machining techniques have improved, resulting in notable reductions in coupler slack. Type H TightLock couplers used on passenger stock have a variation of the 10A contour that nearly eliminates slack during normal operation and minimizes the possibility of "telescoping" during a derailment.

All content from Kiddle encyclopedia articles (including the article images and facts) can be freely used under Attribution-ShareAlike license, unless stated otherwise. Cite this article:
Janney coupler Facts for Kids. Kiddle Encyclopedia.