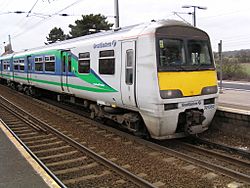 Class 321/3, no. 321362 at Manningtree on 8th March 2003. This unit carries the original-version First Great Eastern livery, which is based on the old Network SouthEast livery.

The British Rail Class 321 alternating current (AC) electric multiple units (EMU) were built by BREL York in three batches from 1986-1989. The design was very successful and led to the development of the similar Class 320 and Class 322 units for use by Strathclyde PTE and Stansted Express (now used by Greater Anglia) respectively. The bodyshell design was also used for construction of the Class 456 direct current (DC) units. The Class 321s were nicknamed 'Dusty Bins', due to the class number sharing the same name as the game show 3-2-1. (This name has also been given to the diesel multiple unit (DMU) Class 153 no. 153321 for the same reason).

Class 321s were originally built for the Bedford services. However, in 1990, they started being used on Great Eastern Main Line services to Southend Victoria, Braintree and Clacton, to replace the class 302 and 305 EMUs, many of which were approaching 50 years old. Some 321s (many of the 3214s) were sent to work inter-regional services for Silverlink, and then briefly for London Midland, primarily on Euston to Northampton/Milton Keynes/Tring services.

All content from Kiddle encyclopedia articles (including the article images and facts) can be freely used under Attribution-ShareAlike license, unless stated otherwise. Cite this article:
British Rail Class 321 Facts for Kids. Kiddle Encyclopedia.