Manningtree is a town and civil parish in the Tendring district of Essex, England, which lies on the River Stour. It adjoins built-up areas of Lawford to the west and Mistley to the east and the three parishes together are sometimes referred to as "Manningtree".

Manningtree is a claimant for the title of smallest town in England.

Manningtree has traditionally claimed to be the smallest town in England, and in 2007 mayor Lee Lay-Flurrie said that this had been confirmed to her by the Census Customer Services, with 700 people in 20 hectares (using the high tide mark). However both this figure and the population of 900 in the civil parish is much higher than the 351 population of Fordwich in Kent. In April 2009 it was proposed that Manningtree should merge with Mistley and Lawford to form a single parish, losing its separate identity as a town. 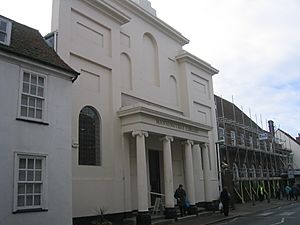 The name Manningtree is thought to derive from 'many trees'. The town grew around the wool trade from the 15th century until its decline in the 18th century and also had a thriving shipping trade in corn, timber and coal until this declined with the coming of the railway. Manningtree is known as the centre of the activities of Matthew Hopkins, the self-appointed Witchfinder General, who claimed to have overheard local women discussing their meetings with the devil in 1644 with his accusations leading to their execution as witches.

Many of the buildings in the centre of the town have Georgian facades which obscure their earlier origins. Notable buildings include the town's library, which was originally built as 'a public hall for the purposes of corn exchange' and was later used around 1900 for public entertainment, and the oldest Methodist church in Essex, located on South Street.

The Ascension, by John Constable, which now hangs in Dedham church, was commissioned in 1821 for the altarpiece of the early seventeenth century church on the High Street, demolished in 1967. 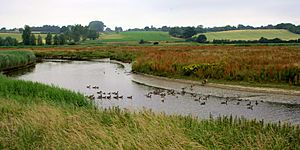 Manningtree is on Holbrook Bay, part of the River Stour in the north of Essex. It is the eastern edge of Dedham Vale.

Nearby villages include Dedham, Mistley, Lawford, Wrabness and Brantham.

All content from Kiddle encyclopedia articles (including the article images and facts) can be freely used under Attribution-ShareAlike license, unless stated otherwise. Cite this article:
Manningtree Facts for Kids. Kiddle Encyclopedia.