Kids Encyclopedia Facts
This page is about the town in England. For the place in Canada, see Fordwich, Ontario.

Fordwich is a remnant market town and a civil parish in east Kent, England, on the River Stour, northeast of Canterbury.

It is the smallest community by population in Britain with a town council. Its population increased by 30 between 2001 and 2011.

The town grew in the Middle Ages as a port for boats on their way upriver to Canterbury. All of the Caen stone used by the Normans to rebuild Canterbury Cathedral in the 12th and 13th centuries was landed at Fordwich. It later became a limb of the Cinque Ports. It lost its status as a town in 1880 when it no longer had a Mayor and Corporation. However, in a reorganisation in 1972, Fordwich was again made a town as much as anything because of its prior importance in what is now a rather sleepy corner of Kent. Fordwich Town Hall, supposedly the smallest in England, dates from the earlier period, having been rebuilt in 1555.

The ancient Church of St Mary the Virgin, now redundant but open to the public, and in the care of the Churches Conservation Trust, contains part of a carved sarcophagus reputed to have contained the remains of St Augustine of Canterbury. The 16th-century building next the Town Hall, now known as Watergate House, was the family home of John and Gregory Blaxland, early 19th-century pioneers of Australia. 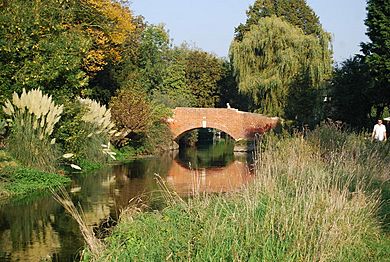 Bridge over the Stour

There are two pubs in the town, the George & Dragon and Fordwich Arms. Fordwich gained angling and fishing repute (from Izaak Walton) for its 'Fordwich trout', one of the largest types found.

Fordwich has been the subject for a series of children's books by author F.J. Beerling. Inspired by the beautiful Kentish countryside and against the backdrop of the river Stour, Beerling fell in love with the old-world charm that Fordwich has, along with the even older charm of the Fordwich Town Hall building.

All content from Kiddle encyclopedia articles (including the article images and facts) can be freely used under Attribution-ShareAlike license, unless stated otherwise. Cite this article:
Fordwich Facts for Kids. Kiddle Encyclopedia.