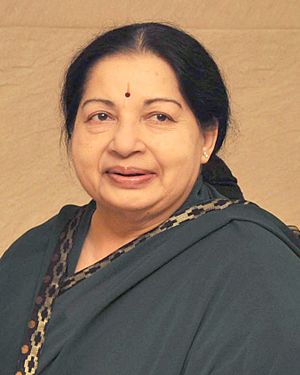 Jayalalithaa was an Indian actor who turned into a politician and served five terms as the Chief Minister of Tamil Nadu, for over fourteen years between 1991 and 2016. From 1989 she was the general secretary of the All India Anna Dravida Munnetra Kazhagam , a Dravidian party. She was praised and popularly called by the party members as "Amma"(means mother), "Thanga Tharagai"(means Golden Maiden) and "Puratchi Thalaivi"(The women Revolutionary leader).Jayalalithaa first came into prominence as a leading film actor in the mid-1960s. She appeared in 140 films between 1961 and 1980 in Tamil, Telugu and Kannada languages. She also earned the name of "Queen of Tamil Cinema".

In 1991 Jayalalithaa became Tamil Nadu's youngest chief minister for the first time. Despite a monthly salary of Rs.1, she made a grand marriage for his foster son Sudhakaran lavishly spending. In the 1996 election, the AIADMK was nearly wiped out . Jayalalithaa herself lost her seat. The new DMK government filed several corruption cases against her, and she spend time in jail. Her fortunes revived in the 1998 general election, as the All India Anna Dravida Munnetra Kazhagam became a key component of Prime Minister Atal Bihari Vajpayee government that her withdrawal of support thrown the BJP government without majority and further triggered to another general election just in a year in 1999. She died in 5 December 2016 due to cardiac arrest according to the reports of the Apollo Hospitals. But still her death remains secret.

All content from Kiddle encyclopedia articles (including the article images and facts) can be freely used under Attribution-ShareAlike license, unless stated otherwise. Cite this article:
Jayalalithaa Facts for Kids. Kiddle Encyclopedia.