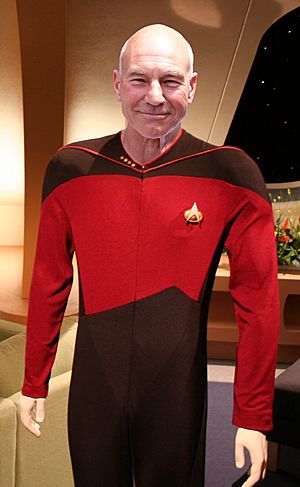 As a character, Picard is very similar to James T. Kirk, albeit slightly older. While Picard is understood to be French, Kirk is of Irish heritage.

Both require equal discipline of their crews, but are also fair toward them. Both are ready to sacrifice themselves for their crews when need be. Their encounter in the movie Star Trek – Generations gave the surviving Picard a great deal of newfound strength to carry on his demanding mission.

Picard was also known as Locutus of the Borg in the episodes "Best of Both Worlds" 1 and 2.de:Figuren im Star-Trek-Universum#Captain Jean-Luc Picard

All content from Kiddle encyclopedia articles (including the article images and facts) can be freely used under Attribution-ShareAlike license, unless stated otherwise. Cite this article:
Jean-Luc Picard Facts for Kids. Kiddle Encyclopedia.