Who and What was Jim Crow

The Jim Crow Museum of Racist Memorabilia at Ferris State University, Big Rapids, Michigan, displays a wide variety of everyday artifacts depicting the history of racist portrayals of African Americans in American popular culture. The mission of the Jim Crow Museum is to use objects of intolerance to teach tolerance and promote social justice.

The Jim Crow Museum of Racist Memorabilia has a collection of over 10,000 objects, primarily created between the 1870s and the 1960s. It also includes contemporary objects. The museum is named after Jim Crow, a song-and-dance caricature of blacks that by 1838 had become a pejorative expression meaning "Negro". When at the end of the 19th century American legislatures passed laws of racial segregation directed against blacks, these statutes became known as the Jim Crow laws.

The museum demonstrates how racist ideas and anti-black images were pervasive within American culture. It also displays artifacts related to contemporary forms of racism, stories about African American achievements, and the Civil Rights Movement.

David Pilgrim, a former professor of sociology, and now Vice President for Diversity and Inclusion at Ferris State University, started to collect racist memorabilia in flea markets across America in the 1970s. By 1996, the collection had grown to over 2,000 pieces, and Pilgrim decided to donate the collection to Ferris State because "it needed a real home." The collection was housed for 15 years in a small space, utilized as a teaching tool for university classes. In 2012 the Jim Crow Museum was opened to the public as a larger, brand new facility, located in the lower level of Ferris State University's FLITE Building.

The Jim Crow Museum houses over 10,000 artifacts; the majority of the objects were created between the 1870s and the 1960s. The largest portion of the museum's holdings is anti-black memorabilia, for example, mammy candles, Nellie fishing lures, picaninny ashtrays, sambo masks, and lawn jockeys. The museum also displays Jim Crow memorabilia—books, signs, tickets, brochures, and photographs—that promoted racial segregation. 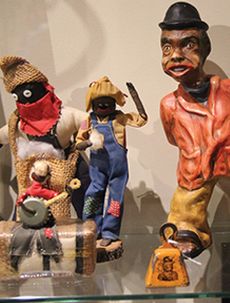 Caricatures of stereotypes of African Americans.

The Jim Crow Museum at Ferris State University strives to become a leader in social activism and in the discussion of race and race relations. "Many of today’s students have only a vague understanding of the dreadful impact of Jim Crow laws and customs." "More specifically, they lack a fundamental knowledge of restrictive covenants, literacy tests, poll taxes, and other oppressive features of the Jim Crow racial hierarchy". The Jim Crow Museum offers students an opportunity to learn about this period in the history of the United States.

Most of the objects displayed in the museum were created with the intent of belittling and humiliating African Americans. Nevertheless, the museum's staff believes that these objects can be used to fuel intelligent discussions about race, race relations, and racism.

Woodbridge N. Ferris, the founder of Ferris Institute (now Ferris State University), challenged faculty, staff, and students to "make the world a better place". The Jim Crow Museum is one attempt by the university to improve the world. This is seen in the museum's mission to "use objects of intolerance to teach tolerance and promote social justice". 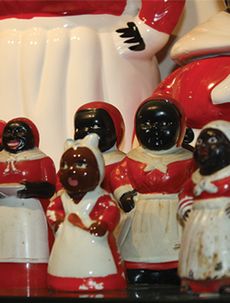 The Jim Crow Museum is open and is free to the public. The Museum features six exhibit areas:

The Museum also offers a comprehensive timeline of the African American experience in the United States. The timeline is divided into six sections: Africa Before Slavery, Slavery in America, Reconstruction, Jim Crow, Civil Rights and Post Civil Rights.

All content from Kiddle encyclopedia articles (including the article images and facts) can be freely used under Attribution-ShareAlike license, unless stated otherwise. Cite this article:
Jim Crow Museum of Racist Memorabilia Facts for Kids. Kiddle Encyclopedia.