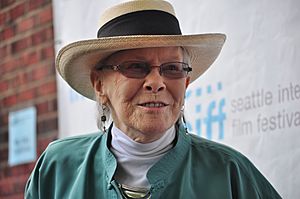 Jini Dellaccio (née Duckworth; January 31, 1917 – July 3, 2014) was an American photographer best known for her images of rock and pop acts of the 1960s, particularly in the Pacific Northwest. Her photographs of the Sonics, the Wailers, Merrilee Rush, the Daily Flash and many others were frequently used for album covers, posters, and publicity stills, and - along with her shots of major acts such as Neil Young, the Rolling Stones, the Beach Boys, and The Who - have been widely reproduced in books, CDs, articles, and gallery exhibitions.

All content from Kiddle encyclopedia articles (including the article images and facts) can be freely used under Attribution-ShareAlike license, unless stated otherwise. Cite this article:
Jini Dellaccio Facts for Kids. Kiddle Encyclopedia.