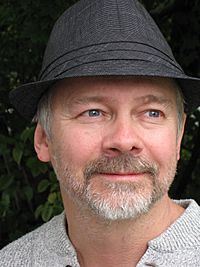 John Smelcer is an American poet and novelist whose claims to Native American (Ahtna) heritage and citizenship have been the subject of multiple controversies.

Neither of Smelcer's birth parents is Native American. Smelcer is a shareholder in Ahtna, Incorporated, an Alaska Native Regional Corporation associated with the Ahtna tribe. Based on unique laws in Alaska that allow for non-Natives to join a tribal corporation, he was able to become an enrolled member of the Native Village of Tazlina, located in Tazlina, Alaska.

He is the adopted son of a Native American father.

Smelcer was appointed as a professor at the University of Alaska Anchorage as part of an effort to increase the number of ethnic minority faculty. However, his credibility was subsequently called into question as details of claimed publications in the New Yorker and elsewhere turned out to be incorrect. Smelcer resigned from the university in the midst of its investigation.

Smelcer is the literary editor of Rosebud, a literary journal published in Madison, Wisconsin.

In 2004, Smelcer won a $10,000 James Jones Literary Society First Novel Award to support the writing of his 2007 novel, The Trap. The award was rescinded in 2015 when it was discovered that Smelcer had published an earlier novel under a pen name. The Trap, a young adult novel, was well received. The Wisconsin State Journal called the book a "spare and lyrical" story about a boy and his grandfather facing up to challenges in a remote part of Alaska. Without Reservation (Truman State University Press) won the 2004 Milt Kessler Poetry Book Award given by Binghamton University. Stealing Indians was nominated for a PEN Center USA literary prize. But was subject to some controversy.

All content from Kiddle encyclopedia articles (including the article images and facts) can be freely used under Attribution-ShareAlike license, unless stated otherwise. Cite this article:
John Smelcer Facts for Kids. Kiddle Encyclopedia.