John Thomas Caine (January 8, 1829 – September 20, 1911) was a delegate to the United States House of Representatives from the Territory of Utah.

Born in the parish of Patrick, Isle of Man, Caine attended the common schools in Douglas, Isle of Man.

Caine immigrated to the United States in 1846 and lived in New York City until 1848, when he went to St. Louis. He converted to The Church of Jesus Christ of Latter-day Saints (LDS Church) in New York City in March 1847. On the 22nd of October, he married Margaret Nightingale. 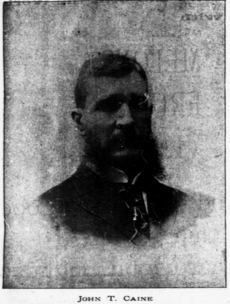 Caine was elected as a Democrat to the Forty-seventh Congress to fill the vacancy caused by the action of the House declaring the Delegate-elect ineligible. The election had been won by George Quayle Cannon (18,567 votes), but the other contestant Allen G. Campbell (1357 votes) successfully contested the outcome. The House of Representatives refused to seat either man, and instead allowed Caine to fill the position in the 47th Congress. He was reelected as a Democrat to the Forty-eighth, Forty-ninth and Fiftieth Congresses and on the People's Party ticket to the Fifty-first and Fifty-second Congresses and served from November 7, 1882, to March 3, 1893. He was not a candidate for renomination in 1892.

Caine was an unsuccessful Democratic candidate for the position of first governor of the newly formed State of Utah in 1895 (the Act of Statehood took effect on January 2, 1896).

Caine served as member of the Utah State Senate in 1896, after which he resumed the management of the Salt Lake Herald.

Caine is the namesake of Caineville, Utah.

All content from Kiddle encyclopedia articles (including the article images and facts) can be freely used under Attribution-ShareAlike license, unless stated otherwise. Cite this article:
John Thomas Caine Facts for Kids. Kiddle Encyclopedia.