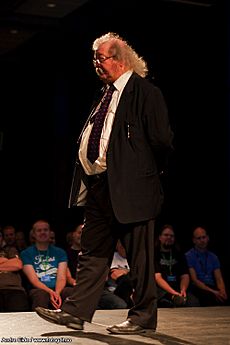 Jon Bing (30 April 1944 – 15 January 2014) was a Norwegian writer and law professor. He was a professor at the Norwegian Research Center for Computers and Law (NRCCL), and the Faculty of Law at the University of Oslo.

All content from Kiddle encyclopedia articles (including the article images and facts) can be freely used under Attribution-ShareAlike license, unless stated otherwise. Cite this article:
Jon Bing Facts for Kids. Kiddle Encyclopedia.