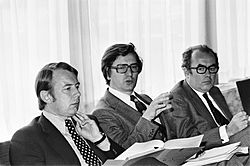 Jozef P. A. "Jos" Chabert (16 March 1933 – 9 April 2014) was a Belgian politician for Christen-Democratisch en Vlaams (Christian Democratic and Flemish; CD&V). He was a Minister of State from 24 November 2009 until his death. Before this, he was a member of the Parliament of the Brussels-Capital Region. He was born in Etterbeek, Brussels-Capital Region.

All content from Kiddle encyclopedia articles (including the article images and facts) can be freely used under Attribution-ShareAlike license, unless stated otherwise. Cite this article:
Jos Chabert Facts for Kids. Kiddle Encyclopedia.