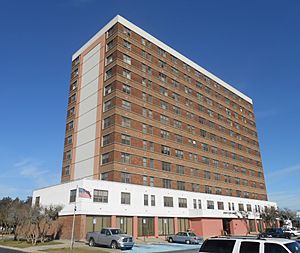 The Joseph Floyd Manor is a retirement home in the upper peninsula area of Charleston, South Carolina. The building is located at the northwest corner of Mt. Pleasant St. and King St. The 12-story building was originally known as the Darlington Apartments and was designed by William G. Lyles, Bissett, Carlisle & Wolff of Columbia, South Carolina.

The apartments cost $1,626,000 when it was built, starting in 1950. The ground floor was supposed to have space for commercial spaces, and the second floor was to have professional offices such as lawyers or doctors along with 156 apartments. Rent for an apartment ranged from $75 per month for a one-bedroom efficiency to $175 a month for one of three three-bedroom penthouse apartments. The property had been bought by Mr. Leonard D. Long in 1933 when it housed a tent community and there were only two nearby houses. Immediately before the construction began in January 1950, the site was home to a World War II-era nightclub known as the Windmill which was being used as a grocery store. The apartments were meant to cater to single men and women and retirees.

In 1979, the Charleston County Housing and Redevelopment Authority tried to rework the building into apartments for the elderly with the assistance of $2.5 million from the Department of Housing and Urban Development. The lowest bid received for the work, however, was $3.6 million. At the time, the chairman of the Authority was Joseph H. Floyd.

The work was eventually carried out, and the newly christened Joseph Floyd Manor reopened in March 1981 following a renovation. After the work, the first floor included a mix of uses; the second floor was for handicapped residents; and the upper floors were for the elderly. The building, named for chairman of the Authority board, reopened in March 1981.

All content from Kiddle encyclopedia articles (including the article images and facts) can be freely used under Attribution-ShareAlike license, unless stated otherwise. Cite this article:
Joseph Floyd Manor Facts for Kids. Kiddle Encyclopedia.