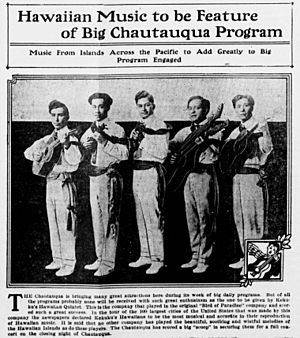 A picture of the Kekuku's Hawaiian Quintet in a 1916 newspaper 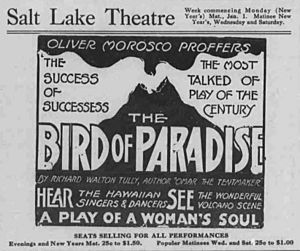 A 1916 advertisement for the famous play "Bird of Paradise." The Broadway show popularized Hawaiian music to Americans in 1912.

Kekuku was born Joseph Kekuku’upenakana’iaupuniokamehameha in Lāʻie, a village on the island of Oʻahu, Hawaii. When Joseph was 15, he and his cousin, Sam Nainoa left for a boarding school in Honolulu. In 1889 while attending the Kamehameha School for Boys, Kekuku accidentally discovered the sound of the steel guitar.

In an article first seen in 1932, C.S. DeLano, publisher of the "Hawaiian Music In Los Angeles" whose "Hawaiian Love Song" was the first original composition to be written for the Hawaiian Steel Guitar said:

'"Joseph told me that he was walking along a road in Honolulu forty-two years ago, holding an old Spanish guitar, when he saw a rusty bolt on the ground. As he picked it up, the bolt accidentally vibrated one of the strings and produced a new tone that was rather pleasing. After practicing for a time with the metal bolt, Joe experimented with the back of a pocket-knife, then with the back of a steel comb, and still later on with a highly-polished steel [bar] very similar to the sort that is used today."'

In 1904 at the age of 30, Kekuku left Hawaii and would never return. He started in the United States by performing in vaudeville theaters from coast to coast. His group was "Kekuku's Hawaiian Quintet" and were sponsored by a management group called "The Affiliated."

Kekuku eventually returned to the United States and, at the age of 53, settled in Chicago and ran a popular and successful music school. In 1932 Joseph Kekuku lived in Dover, New Jersey, with his wife and gave Hawaiian guitar lessons.

On January 16, 1932, at the age of 58, Kekuku died in Morristown, New Jersey, of a cerebral hemorrhage. Kekuku is buried in the Orchard Street Cemetery.

In 1993, Joseph Kekuku was inducted into the Steel Guitar Hall of Fame with full honors as the inventor of the Hawaiian steel guitar. A statue of him was erected at the Polynesian Cultural Center in Hawaii in 2015.

All content from Kiddle encyclopedia articles (including the article images and facts) can be freely used under Attribution-ShareAlike license, unless stated otherwise. Cite this article:
Joseph Kekuku Facts for Kids. Kiddle Encyclopedia.