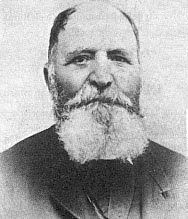 Joseph Monier (8 November 1823, Saint-Quentin-la-Poterie, France – 13 March 1906, Paris) was a French gardener and one of the principal inventors of reinforced concrete.

As a gardener, Monier was not satisfied with the materials available for making flowerpots. Clay was easily broken and wood weathered badly and could be broken by the plant roots. Monier began making concrete pots and tubs, but these were not stable enough. In order to strengthen the concrete containers, he experimented with embedded iron mesh. He was not the first to experiment with reinforced concrete, but he saw some of the possibilities in the technique, and promoted it extensively.

The important point of Monier's idea was that it combined steel and concrete in such a way that the best qualities of each material were brought into play. Concrete is easily procured and shaped. It has considerable compressive or crushing strength, but is weak in strengthh. Steel, on the other hand, is easily used in simple forms such as long bars, and is extremely strong. But it is difficult and expensive to work up into customized forms.

Concrete had been avoided for making beams, slabs and thin walls because its lack of tensile strength doomed it to fail in such circumstances. But if a concrete slab is reinforced with a network of small steel rods on its undersurface where the tensile stresses occur, its strength will be enormously increased.

François Hennébique saw Monier's reinforced concrete tubs and tanks at the Paris Exposition and began experimenting with ways to apply this new material to building construction. He set up his own firm the same year and in 1892 he patented a complete building system using the material.

In 1885 German engineer Gustav Adolf Wayss (1851–1917) bought Monier's patent and developed it further. He conducted further research in the use of reinforced concrete as a building material, and established a number of construction companies for reinforced concrete (the most famous are Wayss & Freytag and Beton- und Monierbau AG).

All content from Kiddle encyclopedia articles (including the article images and facts) can be freely used under Attribution-ShareAlike license, unless stated otherwise. Cite this article:
Joseph Monier Facts for Kids. Kiddle Encyclopedia.