Josephine Dodge Daskam, Mrs. Selden Bacon (February 17, 1876 – July 29, 1961) was an American writer of great versatility. She is chiefly known as a writer who made the point of having female protagonists.

Josephine Dodge Daskam was born on February 17, 1876 in Stamford, Connecticut to Anne (Loring) and Horace Sawyer Daskam. She wrote a series of juvenile mysteries, as well as works dealing with more serious themes. She published books of poetry, which were well received by critics; as noted by one critic, some of her poetry was set to music. She was published under the name "Josephine Daskam".

She also wrote on women's issues and women's roles as well. She was a pioneer in the Girl Scouts movement and compiled the guidebook used by that organization.

Bacon graduated from Smith College in 1898. She published a collection of ten short stories inspired by her experiences in 1900, intending "to deepen...the rapidly growing conviction that the college girl is very much like any other girl." 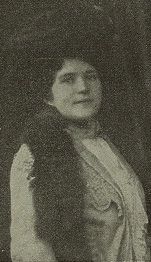 Josephine Daskam Bacon's portrait as published with a review of her volume Poems (1903).

All content from Kiddle encyclopedia articles (including the article images and facts) can be freely used under Attribution-ShareAlike license, unless stated otherwise. Cite this article:
Josephine Daskam Bacon Facts for Kids. Kiddle Encyclopedia.