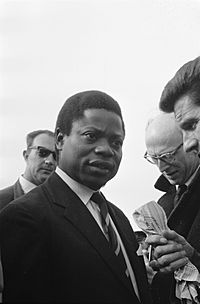 Justin Marie Bomboko (1928 – 10 April 2014) was a Congolese civil servant. He was the Minister of Foreign Affairs for the Congo. He became minister in 1960. He is often called "The Father of Independence" for the Congolese.

Bomboko died from a long illness in Brussels, Belgium, aged 86.

All content from Kiddle encyclopedia articles (including the article images and facts) can be freely used under Attribution-ShareAlike license, unless stated otherwise. Cite this article:
Justin Marie Bomboko Facts for Kids. Kiddle Encyclopedia.