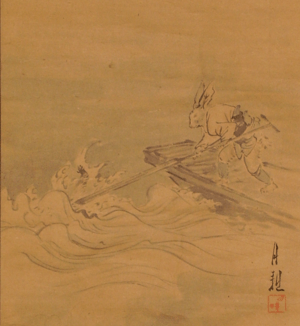 The climactic scene of Kachi-kachi Yama, in which the rabbit strikes the already-sinking tanuki with an oar, and reveals his vendetta. Detail from a Japanese painting circa 1890s-1900s.

Kachi-kachi Yama (かちかち山, kachi-kachi being an onomatopoeia of the sound a fire makes and yama meaning "mountain", roughly translates to "Fire-Crackle Mountain"), also known as Kachi-Kachi Mountain and The Farmer and the Badger, is a Japanese folktale in which a tanuki (Japanese raccoon dog) is the villain, rather than the more usual boisterous, well-endowed alcoholic. 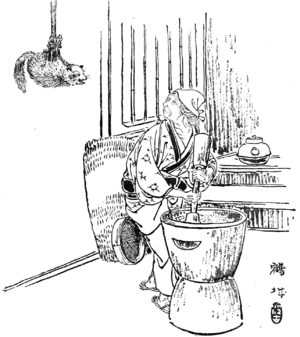 The tied-up tanuki enticing the woman to set him free, from The Japanese Fairy Book

As the story goes, a man caught a troublesome tanuki in his fields, and tied it to a tree to kill and cook it later. When the man left for town, the tanuki cried and begged the man's wife who was making some mochi, a sweet rice dish, to set him free, promising he would help her. The wife freed the animal, only to have it turn on her and kill her. The tanuki then planned a foul trick.

Using its shapeshifting abilities, the tanuki disguised itself as the wife and cooked a soup, using the dead woman's flesh. When the man came home, the tanuki served him the soup. After the meal, the tanuki reverted to its original appearance and revealed its treachery before running off and leaving the poor man in shock and grief. 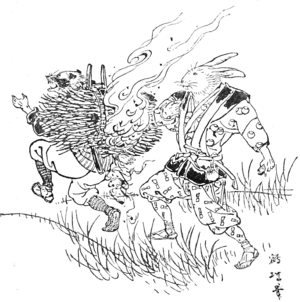 The bundle is set on fire

The couple had been good friends with a rabbit that lived nearby. The rabbit approached the man and told him that it would avenge his wife's death. Pretending to befriend the tanuki, the rabbit instead tortured it through various means, from dropping a bee's nest on it to 'treating' the stings with a peppery poultice that burned.

The title of the story comes from the especially painful trick that the rabbit played. While the tanuki was carrying a heavy load of kindling on his back to make a campfire for the night, he was so burdened that he did not immediately notice when the rabbit set fire to the kindling. Soon, the crackling sound reached its ears and it asked the rabbit what the sound was. "It is Kachi-Kachi Yama" the rabbit replied. "We are not far from it, so it is no surprise that you can hear it!". Eventually, the fire reached the tanuki's back, burning it badly, but without killing it.

The tanuki challenged the rabbit to a life or death contest to prove who was the better creature. They were each to build a boat and race across a lake in them. The rabbit carved its boat out of a fallen tree trunk, but the foolish tanuki made a boat of mud. In other versions the rabbit built both boats.

The two competitors were evenly matched at first, but the tanuki's mud boat began dissolving in the middle of the lake. As the tanuki was failing in its struggle to stay afloat, the rabbit proclaimed its friendship with the human couple, and that this was the tanuki's punishment for its horrible deeds. In other versions the rabbit strikes the tanuki with his oar to ensure he sinks.

The rabbit then goes back to the old man's home and tell him about the vengeance, much to the relief of the old man. He thanks the rabbit for his deed.

There are other versions that alter some details of the story, such as the severity of what the tanuki did to the woman and how the tanuki got the mud boat.

All content from Kiddle encyclopedia articles (including the article images and facts) can be freely used under Attribution-ShareAlike license, unless stated otherwise. Cite this article:
Kachi-kachi Yama Facts for Kids. Kiddle Encyclopedia.