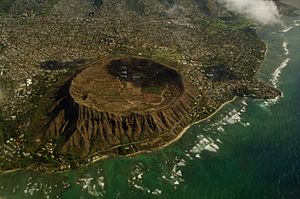 Aerial view of Diamond Head with Kaimuki to the upper left

Kaimukī is a residential neighborhood in Honolulu, Hawaii, United States. 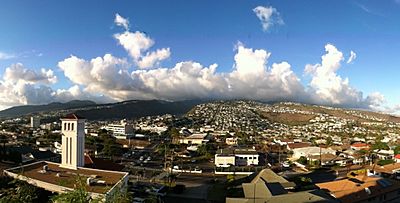 In the 19th century the area was a farm of King Kalākaua, where ostriches roamed wild over the mountain side. It later became the site of a carnation farm for funeral flowers. Now a mix of residential area with a small business district (mainly restaurants and service industries), it is located in the urbanized Honolulu region near Kahala and Diamond Head.

Kaimukī is an ancient Hawaiian name. Its name comes from Ka imu kī meaning "The ti root oven" in the Hawaiian language. The area was known for the many ovens used to bake kī Cordyline fruticosa, or ti roots, into a sweet food similar to candy.

Kaimukī's main street is Waialae Avenue, pronounced. Several restaurants and stores are located on this street, as well as Kaimukī District Park.

The neighborhood of Kaimukī is home to historic buildings. The Kaimuki Fire Station, designed in the Spanish Mission Style by G.R. Miller, was built in 1924 and is still used as a station today. The Queen Theater, designed by Lyman Bigelow, opened in 1936 but closed in 1985.

Kapi‘olani Community College, one of ten branches of the public University of Hawaiʻi system, is located in Kaimuki along with the private Chaminade University.

The Hawaii Japanese School - Rainbow Gakuen (ハワイレインボー学園 Hawai Rainbō Gakuen), a supplementary weekend Japanese school, holds its classes in Kaimuki Middle School in Honolulu and has its offices in another building in Honolulu.

Israel Kamakawiwo'ole was raised in the neighborhood.

All content from Kiddle encyclopedia articles (including the article images and facts) can be freely used under Attribution-ShareAlike license, unless stated otherwise. Cite this article:
Kaimuki, Hawaii Facts for Kids. Kiddle Encyclopedia.