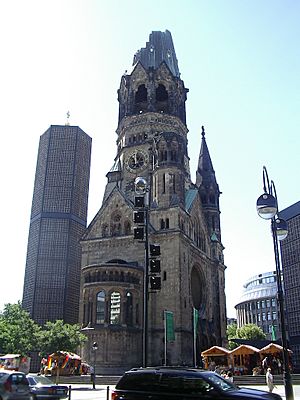 The Kaiser Wilhelm Gedächtniskirche English: Emperor William Memorial Church is a ruined church in Berlin. It belongs to the Protestant Evangelical Church in Germany

It is on the Breitscheidplatz, at the end of the Kurfürstendamm.

The old church was built between 1891 and 1895 according to plans by Franz Schwechten.

Emperor Wilhelm II ordered the building of the church to honour his grandfather Wilhelm I. The neo-romanesque style is a reminder of the many Romanesque churches in the Rhineland like Bonn Minster. 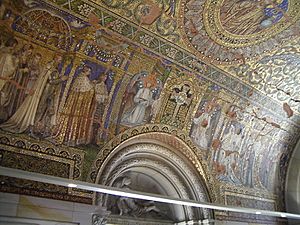 The ceiling inside the new church

Mosaics inside the church showed the life and work of Emperor Wilhelm I. During World War II, the church was destroyed during a British RAF bombing raid in 1943. The only remainder of the old building is the ruin of the belfry, which is also called German: der Hohle Zahn ("the hollow tooth"). 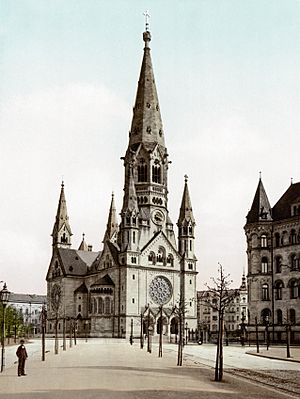 The new church has a cross made of nails from the old Coventry Cathedral, destroyed by German Luftwaffe bomb attacks in what was called the Coventry Blitz. It was consecrated on May 25, 1962, the same day as the new Coventry Cathedral. Both churches were built next to the ruins of the old building, which were kept as reminders of the horrors of war.

As well as the Coventry cross, the Gedächtniskirche has a cross of the Russian Orthodox Church and a design known as the Stalingrad Madonna by Lieutenant Kurt Reuber, created in December 1942 in Stalingrad (now Volgograd), as symbols of peace between the three countries that were once at war.

In December 2007, Charles Jeffrey Gray, a former British pilot who carried out World War II bombing raids over Germany, joined a campaign to rescue the Kaiser Wilhelm Memorial Church from decay. After reading about the condition of the Church, Gray contacted Wolfgang Kuhla, the chairman of the church's advisory board, asking for its tower be restored. A fund was launched to help raise the costs of its repair.

All content from Kiddle encyclopedia articles (including the article images and facts) can be freely used under Attribution-ShareAlike license, unless stated otherwise. Cite this article:
Kaiser Wilhelm Gedächtniskirche Facts for Kids. Kiddle Encyclopedia.