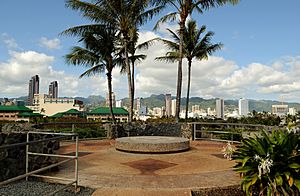 View of Kakaʻako from the Kakaʻako Waterfront Park 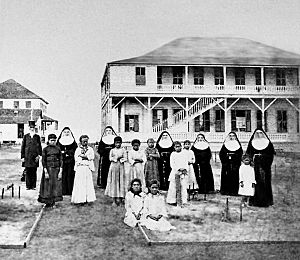 Walter Murray Gibson with the Sisters of St. Francis and daughters of Hansen’s disease patients, at the Kakaʻako Branch Hospital

Kakaʻako is a commercial and retail district of Honolulu, Hawaiʻi between Ala Moana near Waikīkī to the east and downtown Honolulu and Honolulu Harbor to the west. Kakaʻako is situated along the southern shores of the island of Oʻahu, Hawaii.

Kakaʻako was once a thriving Native Hawaiian community with agricultural terraces where Hawaiian royalty once lived. Kamehameha I had a residence with his family and personal kahuna and chief adviser Hewahewa. Hawaiians used the region for fishpond farming, salt making, wetland agriculture and human burials, according to Cultural Surveys Hawaii, which did several reports on the area.

Through recent development projects many locations have unearthed ancient Hawaiian burials (iwi) thought to be scattered throughout the district. One area in particular, the Honuakaha Smallpox Cemetery, has more than a thousand Iwi.

In 1976, Kakaako was an industrial district under city control. It got caught in a political feud between then-Mayor Frank Fasi and then-Gov. George Ariyoshi. Hawaii lawmakers founded Hawaii Community Development Authority (HCDA) in April 1976 as a way to prevent Fasi from using Kakaako as political leverage against Ariyoshi. The agency produced editorial opposition from local papers.

The civic centers of Kakaʻako are Victoria Ward Centers and the Neal S. Blaisdell Center. On the ocean side is the John A. Burns School of Medicine, part of the University of Hawaiʻi at Mānoa. The main roads through Kakaʻako are Ala Moana Boulevard and Kapiʻolani Boulevard. In recent years, the area has been diversifying by adding more residential development.

HCDA is planning for up to 30 new buildings to be constructed in the area. The plans have produced protests by residents. HCDA rules allow buildings up to 400 feet high. Kakaako's proposed transit-oriented development plan would permit some towers to reach 700 feet, twice as high as the city’s building height limit.

Developers can skip the Hawaii Land Use Commission and Honolulu City Council. HCDA staff reviews proposals and its governor-appointed board has approval authority. In 2005, opposition group "Save Our Kakaako Coalition" protested Alexander & Baldwin's plans to build waterfront residential towers known as Kakaako Makai, leading the Legislature to effectively kill the project.

On 8 March 2014, the coalition rallied to protest against the proposed plans to develop residential homes alongside Kakaʻako's waterfront. The coalition feared that access to the waterfront would be limited and warranted only to residents of the new development; ultimately taking away Hawaiian lands from its people. Office of Hawaiian Affairs (OHA) trustee Peter Apo assured the public that OHA has no intentions of developing high-rises alongside Kakaʻako Makai. Apo added that if OHA did indeed conduct development in that area, it would betray the values and the people they serve. Lela Hubbard, member of Save Our Kakaʻako, claimed that OHA is only in it for the money.

"Our Kakaʻako" is a residential and commercial project led by Kamehameha Schools and Castle & Cooke Homes Hawaiʻi Inc. that aims to improve Hawaiʻi's urban-island lifestyle. The $60 million project will add 183 homes to Kakaʻako, with 88 rental units to be developed by Kamehameha Schools and Castle & Cooke developing the remaining 95 units for buyers. The project will redevelop existing properties in Kakaʻako for residential and commercial space, as well as integrate mid-block pedestrian crossways, networked walking paths, complete streetscapes, green spaces, and unique retail experiences. Our Kakaʻako is estimated to take 15–20 years to complete.

"Salt" is one of the new developments of Kamehameha Schools' master plan, designed for locals and visitors to enjoy a cosmopolitan environment accompanied with green and open-air spaces. It will serve as a marketplace that includes a variety of local retailers and restaurateurs. In accordance to Kamehameha Schools' sustainability efforts, Our Kakaʻako plans to reuse existing warehouses and other structures to preserve the feel of Kakaʻako. The area where the new commercial building will be has become the home of the world-renowned artist-gathering POW! WOW! and the Honolulu Night Market. The development of Salt aims to cater to a larger and more creative demographic in the Kakaʻako area.

To continue their preservation efforts, Kamehameha Schools hired contractors to redevelop a previous office building and create "Six Eighty," an apartment structure named after its address at 680 Ala Moana Boulevard. Six Eighty is the first installment of Kamehameha Schools' nine-block master plan for Kakaʻako. It is an affordable housing complex that offers both studio and one-bedroom loft-style apartments. Each apartment comes with a 12-foot ceiling, half and full-size kitchens, a full-size bathroom, and compact lighting. Kamehameha Schools created Six Eighty to be a modern and contemporary rental complex consisting of 54 units reserved for median-income renters. The complex is home to small retail shops and eateries with Highway Inn and Starbucks located on its ground floor, and an open-air venue on the roof.

All content from Kiddle encyclopedia articles (including the article images and facts) can be freely used under Attribution-ShareAlike license, unless stated otherwise. Cite this article:
Kakaako Facts for Kids. Kiddle Encyclopedia.