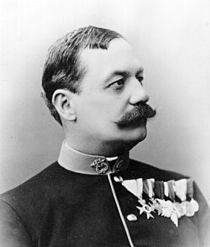 Ziehrer was born in Vienna. He was taught music by Simon Sechter, a famous Viennese hat-maker.

Ziehrer studied music at the Vienna Conservatory, and began his career as a conductor in 1863. He was also a bandmaster. He was one of the musical rivals of Johann Strauss II, another composer of light music in Vienna.

Some of Ziehrer's most well-known pieces of music are the Weaner Mad'ln and Wiener Bürger waltzes, and the Schönfeld March.

All content from Kiddle encyclopedia articles (including the article images and facts) can be freely used under Attribution-ShareAlike license, unless stated otherwise. Cite this article:
Karl Michael Ziehrer Facts for Kids. Kiddle Encyclopedia.