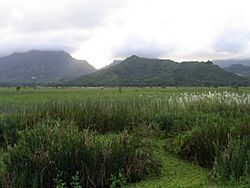 Kawainui Marsh (or Kawainui Fishpond) is, at over 800 acres (3.2 km2), the largest wetlands in the Hawaiian Islands. The marsh is located in the ahupuaʻa of Kailua in the district of Koʻolaupoko on the windward side of O'ahu and is owned by the State of Hawaii and the City & County of Honolulu. 250 acres (1.0 km2) of the land is from a 1968 sale to the City and County of Honolulu by Kaneohe Ranch. Kawainui Marsh is a Ramsar Convention wetland site, established in February 2005. It is also the largest former fishpond in the Hawaiian islands.

Kawainui is home to many endemic species in Hawaiʻi including several endangered species. Although it has in the modern-day become inundated with invasive species, Kawainui is host to a wide array of Native Hawaiian water birds. These species include Ae’o, Alae Ula, Alae Keo keo and Koloa.

Kawainui means "the big water" in Hawaiian and reflects the fact that this area was a huge marine or estuarine, body of water at the time when the area was first settled by Polynesians. Kawainui and the area of Kailua is one of the earliest settlements of Hawaiʻi. For the majority of its history, Kawainui was utilized as a fishpond to cultivate food through aquaculture. Hawaiians grew multiple species of fish as well as limu. Kawainui is also famed in Hawaiian history for having a type of edible mud called lepo ʻai. Kawainui was also surrounded by extensive networks of wetland taro terraces. Kawainui’s importance is also noted by the multiple heiau or Hawaiian temples built along its banks the most well-known of which are Ulupo Heiau on the east side and Pahukini Heiau and Holomakani Heiau on the west side. According to Hawaiian historians, Kawainui used to connect directly to the ocean, deep enough for European ships to sail into it. After the Great Mahele the ahupuaʻa of Kailua would come under the ownership of Queen Kalama. Kawainui would be included in this and the area would primarily be utilized for rice farming by Chinese farmers. Princess Pauahi and Princess Likelike would be recorded as traveling to the area and eating the famed edible mud as late as 1872 showing that the fishpond was still being maintained to propagate this mud at least until the 1870s.

Today, nearly all of the marsh is covered by plants, and this is either floating on water, growing on a mat of peat that is floating on water, or in the upper-most parts of the marsh a wet meadow. The latter area is utilized by cattle for grazing when not flooded by high water level. Most of the marsh lies behind a levee constructed by the United States Army Corps of Engineers for flood control purposes. The Army Corps of Engineers is also responsible for many of the permanent diverting of water from Kawainui and it’s streams. The marsh is the lowland recipient of sometimes very heavy rainfall in Maunawili Valley. The marsh outlet is through a man-made channel, Oneawa Channel.

Kawainui has been attempted to be developed multiple times by the state government and private interests. However, further development of the area has been thwarted by community organizing including the Lani-Kailua Outdoor Circle.

All content from Kiddle encyclopedia articles (including the article images and facts) can be freely used under Attribution-ShareAlike license, unless stated otherwise. Cite this article:
Kawai Nui Marsh Facts for Kids. Kiddle Encyclopedia.