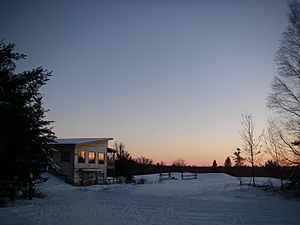 The Kawartha Nordic Ski Club (KNSC) is a Nordic ski area located in North Kawartha township, Peterborough County, Ontario. It was founded in 1976 by a group of avid cross country skiers in Peterborough, Ontario. Today, it offers over 40 kilometres of both classic and skate trails, as well as 10 km of snowshoe trails through scenic, Canadian Shield wilderness. KNSC is a not-for-profit organization, governed by a volunteer board of directors, and operated by numerous volunteers. The club has received funding from the Ontario Trillium Foundation, in 2002, 2007, 2011, and 2014 to improve trails and purchase grooming equipment.

KNSC offers both children and adult ski instruction. The children's programs follow the Cross Country Canada skill development program for Jackrabbit and Track Attack. The youth 'Athlete Development Program' is focussed on more advanced training and racing for 13- to 18-year-olds. Adult programs include group lessons by knowledgeable club members. A series of coaching and officials training is also offered.

KNSC was founded in 1976 by a group of avid cross country skiers in Peterborough, Ontario and focussed on operation of the Kawartha Ski Tour. This event attracted skiers from across Ontario as a loppet running from Apsley to Buckhorn, a distance of 40 kilometres. A 16-acre (65,000 m2) property was purchased by the club to secure access to ski trails that were developed around the ski tour. The tour was cancelled in the early 1990s due in part to inconsistent snow conditions. Marjorie Shephard's book "The Kawartha Nordic Ski Club 1974-2004, 30 Dedicated Years" details the club's history over this time.

With support of the Ontario Trillium Foundation, KNSC opened skating trails for the 2002-2003 season and membership grew steadily. The club was rapidly outgrowing its facilities and so in 2004, the Nordic Legacy campaign was initiated to purchase 350 acres (1.4 km2) of land and build a new chalet. The club benefited from the generosity of the Church family who purchased the new property in 2004 on an interim basis to protect it from other uses. The Cossar Cabin and surrounding 16 acres (65,000 m2) of land were sold in 2005. Construction of the new chalet continued through the winter of 2005-2006 and members went without a main chalet that year. By December 2006, the club opened a brand new square log chalet on the new Nordic legacy property immediately south of the old property. Also that year, 10 kilometres of snowshoe trails were opened. The next major expansion (again with funding from the Trillium Foundation) was to come in 2008 with the purchase of a Pisten Bulley groomer which greatly improved the quality of grooming and overall skiing experience. For the 2010-2011 ski season, hydro was installed at the club and Wild Rock Outfitters operated a ski shop in the parking lot offering rentals, lessons, and day passes. A third Trillium grant was received in 2011 for the purchase of a newer Pisten Bulley groomer.

In 2014, a fourth Trillium grant was received to expand youth programs and facilities. Lighting was installed on 2.5 km of trails surrounding the Woodfine Chalet. A well and septic were installed for washrooms to be located in a separate washroom building adjacent to the main chalet (the foundation was prepared in fall of 2014). Four staff positions were hired for the 2014-2015 season for day lodge attendant, groomer, head coach and youth program coordinator.

All content from Kiddle encyclopedia articles (including the article images and facts) can be freely used under Attribution-ShareAlike license, unless stated otherwise. Cite this article:
Kawartha Nordic Ski Club Facts for Kids. Kiddle Encyclopedia.