Keloid, also known as keloid disorder and keloidal scar is the formation of a type of scar. It is a result of an overgrowth of granulation tissue at the site of a healed skin injury. Keloids are firm, rubbery lesions or shiny, fibrous nodules, and can vary from pink to the color of the person's skin or red to dark brown in color. A keloid scar is benign and not contagious, but sometimes accompanied by severe itchiness, pain, and changes in texture. In severe cases, it can affect movement of skin. Keloid scars are seen 15 times more frequently in people of sub-Saharan African descent than in people of European descent. 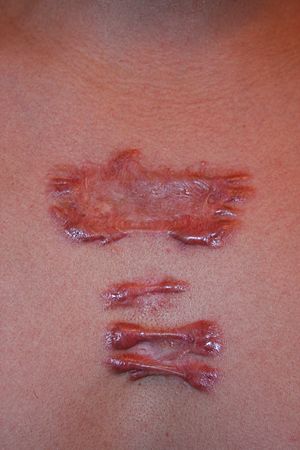 Keloids expand in claw-like growths over normal skin. If the keloid becomes infected, it may ulcerate. Removing the scar is one treatment option; however, it may result in more severe consequences: the probability that the resulting surgery scar will also become a keloid is high, usually greater than 50%. Laser treatment has also been used with varying degrees of success.

Keloids form within scar tissue. Collagen, used in wound repair, tends to overgrow in this area, sometimes producing a lump many times larger than that of the original scar. They can also range in color from pink to red. Although they usually occur at the site of an injury, keloids can also arise spontaneously.

They can occur at the site of a piercing and even from something as simple as a pimple or scratch. They can occur as a result of severe acne or chickenpox scarring, infection at a wound site, repeated trauma to an area, excessive skin tension during wound closure or a foreign body in a wound. Keloids can sometimes be sensitive to chlorine. Keloid scars can grow, if they appear at a younger age, because the body is still growing.

All content from Kiddle encyclopedia articles (including the article images and facts) can be freely used under Attribution-ShareAlike license, unless stated otherwise. Cite this article:
Keloid Facts for Kids. Kiddle Encyclopedia.