Kids Encyclopedia Facts
This article is about the puzzle. For other uses, see Kenken.

KenKen and KenDoku are trademarked names for a style of arithmetic and logic puzzle invented in 2004 by Japanese math teacher Tetsuya Miyamoto, who intended the puzzles to be an instruction-free method of training the brain. The name derives from the Japanese word for cleverness (賢, ken, kashiko(i)). The names Calcudoku and Mathdoku are sometimes used by those who do not have the rights to use the KenKen or KenDoku trademarks.

As in Sudoku, the goal of each puzzle is to fill a grid with digits –– 1 through 4 for a 4×4 grid, 1 through 5 for a 5×5, 1 through 6 for a 6×6, etc. –– so that no digit appears more than once in any row or any column (a Latin square). Grids range in size from 3×3 to 9×9. Additionally, KenKen grids are divided into heavily outlined groups of cells –– often called “cages” –– and the numbers in the cells of each cage must produce a certain “target” number when combined using a specified mathematical operation (one of addition, subtraction, multiplication or division). For example, a linear three-cell cage specifying addition and a target number of 6 in a 4×4 puzzle must be satisfied with the digits 1, 2, and 3. Digits may be repeated within a cage, as long as they are not in the same row or column. No operation is relevant for a single-cell cage: placing the "target" in the cell is the only possibility (thus being a "free space"). The target number and operation appear in the upper left-hand corner of the cage.

In the English-language KenKen books of Will Shortz, the issue of the non-associativity of division and subtraction is addressed by restricting clues based on either of those operations to cages of only two cells in which the numbers may appear in any order. Hence if the target is 1 and the operation is - (subtraction) and the number choices are 2 and 3, possible answers are 2,3 or 3,2. Some puzzle authors have not done this and have published puzzles that use more than two cells for these operations. 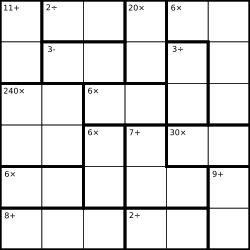 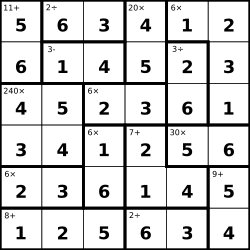 Solution to the above problem.

The objective is to fill the grid in with the digits 1 through 6 such that:

Some of the techniques from Sudoku and Killer Sudoku can be used here, but much of the process involves the listing of all the possible options and eliminating the options one by one as other information requires.

In the example here:

More complex KenKen problems are formed using the principles described above but omitting the symbols +, −, × and ÷, thus leaving them as yet another unknown to be determined. Other authors of puzzles include more complex operations, including exponentiation, modulus, and bit-wise operations. Ranges of values can be varied, such as including zero, or having negative values (e.g., -2 to +2 in a 5-by-5 square).

One of KenKen's main uses is in the classroom as a means of teaching basic arithmetic and logic skills. In 2009, KenKen LLC began the KenKen Classroom (KKCR) Program, which allowed teachers to subscribe to a weekly newsletter providing KenKen puzzle sets, as well as other brain teasers, and KenKen news. Today, over 25,000 educators are a part of the KKCR Program. In addition to KKCR, KenKen also helps educators organize their own KenKen clubs and tournaments in their schools. KenKen partners with educators to help students learn while having fun. KenKen has collaborated with the National Council of Teachers of Mathematics (NCTM), to create a mobile app in order to help students develop their math and logic skills. KenKen is featured on Scholastic Corporation's online sites Scholastic Math and Scholastic Dynamath, as well as on The Math Forum @ Drexel.

Beginning in 2010, KenKen CEO Robert Fuhrer has organized yearly KenKen tournaments held at the Chappaqua Library in Chappaqua, New York. Tournaments are open to all ages and skill levels. In addition to the Chappaqua tournament in December, Fuhrer partnered with IBM to host an international tournament in May 2015. In 2016, five students in India, Gaurav Pandey, Neharika Rajesh, Visharad Srivastava, Devika Pillai and Kajal Agarwal, beat 75,000 competitors to secure a place in the International Round that was held in New York on 18th Dec 2016. In addition to the visitors, many local students ages 8–18 competed in the tournament. The tournament was won by eight-year-old Gaurav Pandey, who beat out competitors up to twice his age. In 2016, the United Arab Emirates also took part in KenKen International Championship, with over 6000 students from more than 60 schools participating. Of those, eight of the top ranking students from the UAE 2016 finals represented the country in the International Level round in New York City on December 18: Eeshan Sharma from GEMS Modern Academy; Ganesh Ramm from The Oxford School, Dubai; Helem Jos from Sunrise English Private School; Mythri Muralikannan from The Millennium School Dubai; Paarth Gupta from GEMS Dubai American Academy; Aryaman Chawla from Dubai College; Gamin Kwon from The English College; and Ghaia Aljarwan from Rosary School.

Over the past several years KenKen has expanded internationally and now runs national tournaments in multiple countries for students. There are three age groups and the student winners of each division attend the KenKen International Championship in New York. Student divisions include Sigma (Approximate age is 14 and up), Kappa (Approximate age 11-14), and Delta (Approximate age 11 and younger). There is also an adult division and a senior division for those over the age of 60.

All content from Kiddle encyclopedia articles (including the article images and facts) can be freely used under Attribution-ShareAlike license, unless stated otherwise. Cite this article:
KenKen Facts for Kids. Kiddle Encyclopedia.