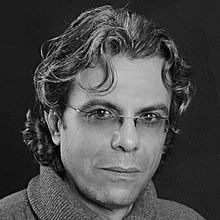 Khaled Juma is a writer from Palestine.

Born in Rafah, on October 25, 1965, Khaled Juma was raised in Al-Shaboura Palestinian Refugee Camp, in the Gaza Strip. He is currently Head of the Cultural Department in Palestine News and Information Agency (WAFA), and was previously Editor-in-Chief of Roya Magazine for seven years. He has a portfolio of over 29 publications in a variety of genres; poetry, prose poetry, short stories, children's stories, TV sketches, plays and over 100 songs.

Khaled Juma has published nine poetry collections. His children's books include The Rabbit Who Did Not Like His Name, which promotes self-acceptance, Diaries of a Germ, an educational title about hygiene, and Black Ear, Blonde Ear which teaches tolerance and acceptance of others. "Three Legs" won second place in the Diwan Al-Arab Competition in 2006.

Khaled Juma has written and adapted a number of theatrical plays. Gaza, Your Sea is a dance musical which was the opening for The First Sea Festival, and a musical based on Kalila Wa Dimna’s The Pigeon, The Fox and The Heron, composed by Moneim Adwan and performed in Aix en Provence Festival, France.

He has also written over 100 songs in both classic Arabic and the Palestinian dialect. His songs have been performed by Palestinian musicians such as Said Murad, Moneim Adwan, Odeh Turjman, Mahmoud Al-Abbadi, Reem Talhami, and Mohammad Assaf. He wrote the opening song for the Palestinian television series Amm Jbara. His works have been translated into English, French, Spanish, German, Bulgarian, Norwegian and Dutch.

Khaled Juma participates in cultural activities in several genres. He founded a folklore dance group in Gaza, and hosts creative writing workshops for children and adults. He has published articles based on his personal research about Palestinian life, history, and war.

1. Nothing Walks in this Dream, Al-Ahliya for Publishing, Jordan, 2015

2. So the Gypsie Wouldn't Love You, Fikr for Research and Publishing, Beirut, 2012

17. Alphabet Village, Series of 5 Stories, UNDP, 2000 (The Flower Story of this series was made into an animation produced by Al-Quds Educational TV)

5. The Pigeon, The Fox and The Heron, Muneim Odwan, Aix en Provence

Theater Plays and other Adaptations

5. Gaza, Your Sea, Dance-Musical, Opening of The First Sea Festival 1995

All content from Kiddle encyclopedia articles (including the article images and facts) can be freely used under Attribution-ShareAlike license, unless stated otherwise. Cite this article:
Khaled Juma Facts for Kids. Kiddle Encyclopedia.