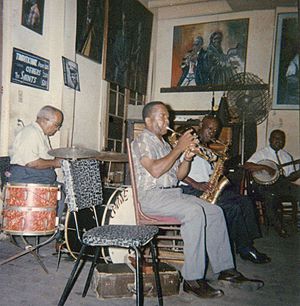 George Colar, better known as Kid Sheik or Kid Sheik Cola, (15 September 1908 - 7 November 1996) was a New Orleans jazz trumpeter. He is most associated with Dixieland jazz and was a long-term performer with the Preservation Hall Jazz Band. He got his nickname from his chic style of dress.

In youth he took informal lessons from Wooden Joe Nicholas and briefly had a band of his own. He worked with George Lewis in the mid-1940s. Over the years, Kid Sheik performed with many jazz notables, including Harold Dejan's Olympia Brass Band and Louis Armstrong. By the 1960s he had his own band.

In his later years, he was married to pianist Sadie Goodson.

Kid Sheik was the subject of the official New Orleans Jazz & Heritage Festival poster in 1990. Kid Sheik is also featured in a 35mm twelve-minute black and white film directed by Frank Decola titled "The Cradle Is Rocking". A 35mm print and a negative of that print is in the Folkstreams Collection in the Southern Folklife Collection of the Wilson Library at the University of North Carolina in Chapel Hill. The film is available for streaming on Folkstreams.net.

All content from Kiddle encyclopedia articles (including the article images and facts) can be freely used under Attribution-ShareAlike license, unless stated otherwise. Cite this article:
Kid Sheik Facts for Kids. Kiddle Encyclopedia.