Kitano Tenmangū is a Shinto shrine in Kamigyō-ku, Kyoto, Japan. The shrine was first built in 947 to appease the angry spirit of bureaucrat, scholar and poet Sugawara no Michizane, who had been exiled as a result of political maneuvers of his enemies in the Fujiwara clan. 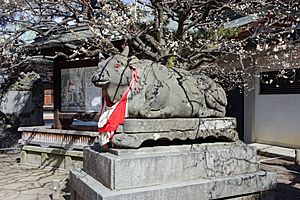 The shrine became the object of Imperial patronage during the early Heian period. In 965, Emperor Murakami ordered that Imperial messengers be sent to report important events to the guardian kami of Japan. These messenger, called heihaku, were initially presented to 16 shrines; and in 991, Emperor Ichijō added three more shrines to Murakami's list — including Kitano.

From 1871 through 1946, the Kitano Tenman-gū was officially designated one of the Modern system of ranked Shinto Shrines, meaning that it stood in the second rank of government supported shrines. The current buildings date from the early 17th century. 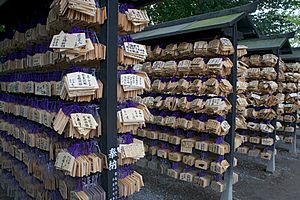 The shrine was dedicated to Michizane; and in 986, the scholar-bureaucrat was deified (given the title of a "God") and the name of "Tenjin" was given to him.

The grounds are filled with Michizane's favorite tree, the red and white ume or plum blossom, and when they blossom the shrine is often very crowded. The Plum Blossom Festival is held on February 25, coinciding with the monthly market. 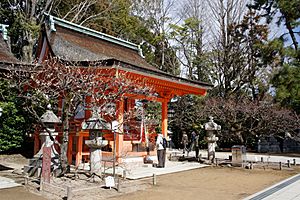 There is an open-air tea ceremony, where tea and wagashi are served to 3,000 guests. The plum festival has been held on the same day every year for about 900 years to mark the death of Michizane.

The outdoor tea ceremony dates back to 1952. In that year, a big festival was held to mark the 1,050th anniversary of Michizane's death.

Sugawara Michizane is associated with Tenjin, the kami ("Shinto god") of education. Consequently, many students visit Kitano Tenmangu to pray for success in their studies. The shrine can become especially crowded with students during exam times and school trip seasons.

All content from Kiddle encyclopedia articles (including the article images and facts) can be freely used under Attribution-ShareAlike license, unless stated otherwise. Cite this article:
Kitano Tenman-gū Facts for Kids. Kiddle Encyclopedia.