Lower Klamath NWR, established in 1908, was the first waterfowl refuge in the United States. Consisting of 46,900 acre (190 km2), it includes shallow freshwater marshes, open water, grassy uplands, and croplands that are intensively managed to provide feeding, resting, nesting, and brood rearing habitat for waterfowl and other water birds. 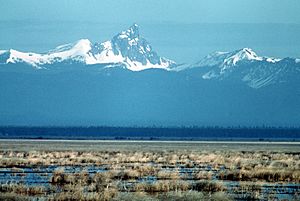 In 1905, the U.S. Bureau of Reclamation initiated the Klamath Reclamation Project to convert the lakes and marshes of the Lower Klamath Lake and Tule Lake areas to agricultural lands. As these wetlands receded, the reclaimed lands were opened to agricultural development and settlement. Today, less than 25% of the historic wetlands remain.

Klamath Basin Refuges consist of a variety of habitats including freshwater marshes, open water, grassy meadows, coniferous forests, sagebrush and juniper grasslands, agricultural lands, and rocky cliffs and slopes. These habitats support diverse and abundant populations of resident and migratory wildlife with 433 species having been observed on or near the Refuges. In addition, each year the Refuges serve as a migratory stopover for about three-quarters of the Pacific Flyway waterfowl, with peak fall concentrations of over 1 million birds. The Klamath Refuge has been described as "the heartbeat of the Pacific Flyway".

All content from Kiddle encyclopedia articles (including the article images and facts) can be freely used under Attribution-ShareAlike license, unless stated otherwise. Cite this article:
Klamath Basin National Wildlife Refuge Complex Facts for Kids. Kiddle Encyclopedia.