Knightsville is an urban neighborhood in the city of Cranston, Rhode Island.

Knightsville is named after local inn keeper and U.S. Congressman Nehemiah Knight (1746–1808). The Knights were descendants of early English emigrants who were some of the earliest settlers in the area. According to at least one source:

Knightsville is known to some residents as Monkeytown, and Cranston Street leading to Knightsville is sometimes referred to as Monkeytown Road. This was a disparaging term used to describe the Irish population who lived in the area in the 19th century.

Early town meetings in the 18th century were held in Caleb Arnold's tavern, Nehemiah Knight's tavern (currently on the site of present city building), and the old Knightsville Meetinghouse. By the turn of the 20th century, the city was home to various thriving businesses and industries, attracting large numbers of European immigrants. Many residents are now Italian-American, with many able to trace their lineage to Itri, a small Italian village approximately halfway between Rome and Naples. 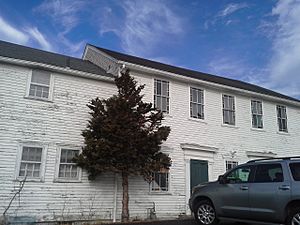 The historic Knightsville Meetinghouse, built in 1807. 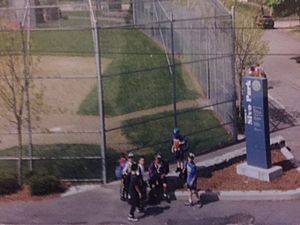 The historic Knightsville Meetinghouse, built in 1807, was located within the village but demolished in December of 2015. The neighborhood also features church celebrations including the Feast of Saint Mary, under the title of Maria Santissima della Civita, a weeklong celebration featuring a carnival, fireworks, and a religious procession. It is held every July and attracts thousands of visitors. The actual feast day is July 21, and is celebrated the closest weekend to that date. Knightsville is home to several churches, including St. Mary's, St. Ann's, and Knightsville-Franklin Congregational Church. The neighborhood also has a public library, The Knightsville Branch. Knightsville is also the home of PFC Anthony J. Sivo, who was killed in action in Vietnam in 1968. Anthony J. Sivo Park was built in his honor on November 11, 1991.

All content from Kiddle encyclopedia articles (including the article images and facts) can be freely used under Attribution-ShareAlike license, unless stated otherwise. Cite this article:
Knightsville, Rhode Island Facts for Kids. Kiddle Encyclopedia.