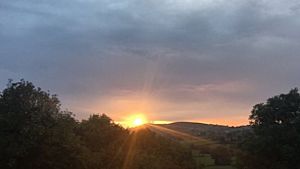 A view of Knock Iveagh 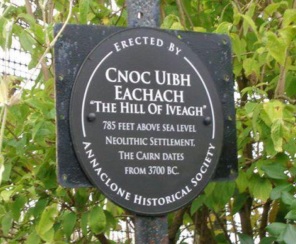 Knock Iveagh (from the Irish: Cnoc Uíbh Eachach meaning "hill of Iveagh") is a hill near Rathfriland, County Down, Northern Ireland. It is topped by an ancient burial cairn and was part of a ritual landscape, associated with the Uí Eachach tribe. In the Middle Ages it was the inauguration site of the Magennis chiefs of Iveagh.

On the summit is an ancient burial cairn, made up of a small chamber which was covered by a mound of stone and earth. The cairn is thought to date from around 4000BC. It is one of 1,900 scheduled monuments protected by law, specifically the Historic Monuments and Archaeological Objects (NI) Order 1995, which makes it an offence to carry out changes to the site without consent.

The hill is named after the former Gaelic territory of Iveagh (Uíbh Eachach, 'descdendants of Echu'). It was the ancestral seat of the Magennis (Mag Aonghusa) chiefs of Iveagh and later the Viscounts of Iveagh. The kings and chiefs of Iveagh were believed to have been inaugurated on its summit.

The hill is part of a ritual landscape, including other sites of importance to the Magennises. These include:

Gavin Hughes of the Centre for Medieval and Renaissance Studies, Trinity College Dublin, has said of the hill and its place within the wider ritual landscape: "Knock Iveagh appears to be a dominating feature in an exciting amphitheatre of multi-period archaeology which deserves proper and further detailed research. Indeed, such a complex historical continuity in the landscape is very rare – and this could be unique."

There is thought to have been little archaeological excavation or surveying work carried out on the hill, save for the work Pat Collins of the Northern Ireland Archaeological Survey in 1957. Eamonn Kelly, former Keeper of Antiquities at the National Museum of Ireland, has called for further surveying to be carried out before any potential development near the hill, "given the strong probability that there is additional and possible extensive archaeology present relating to the ritual use of the hill (and possibly with booleying activities)".

Preliminary archaeological work carried out in 2018 has suggested that there may be a link between the hill and Saint Patrick.

All content from Kiddle encyclopedia articles (including the article images and facts) can be freely used under Attribution-ShareAlike license, unless stated otherwise. Cite this article:
Knock Iveagh Facts for Kids. Kiddle Encyclopedia.