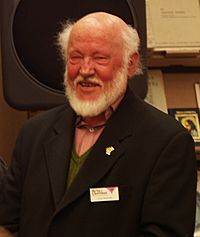 Knuts Skujenieks (born September 5, 1936) is a Latvian poet, journalist, and translator. He was born in Riga.

In 1962, he was convicted of anti-Soviet activities, and sentenced to seven years in prison camp in Mordovia, Russia. His first poems were released in 1978. The poems he wrote during his captivity were published in 1990.

In 2008 he was awarded the Baltic Assembly Prize for Literature.

All content from Kiddle encyclopedia articles (including the article images and facts) can be freely used under Attribution-ShareAlike license, unless stated otherwise. Cite this article:
Knuts Skujenieks Facts for Kids. Kiddle Encyclopedia.