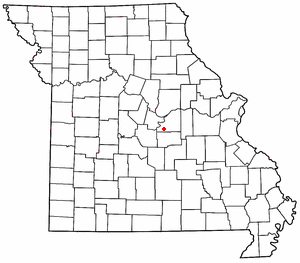 Koeltztown (KELTS'-town) is an unincorporated community in southern Osage County, Missouri, United States. It is located about seventeen miles southeast of Jefferson City and is one of the oldest settlements in Osage County. Founded in 1858, the community was named for its first postmaster, August Koeltze. While not Catholic, Koeltz donated land for a Catholic parish to encourage enough settlers to the area to establish a town around St. Boniface Catholic Church. A post office called Koeltztown has been in operation since 1862.

During the American Civil War, a few raiders came through but there no major battles in the area. Most European settlers were German immigrants, who arrived in greatest number in the mid- to late-19th century.

All content from Kiddle encyclopedia articles (including the article images and facts) can be freely used under Attribution-ShareAlike license, unless stated otherwise. Cite this article:
Koeltztown, Missouri Facts for Kids. Kiddle Encyclopedia.