When the track was built in 1947, it was designed for midget car racing. It was built by Albert Miller and John Rose. The track opened on July 6, 1947. The only winged USAC sprint car event in track history was held on June 23, 1991 and it was won by Kelly Kinser.

The track is one of the venues for the Indiana Sprintweeks of USAC Sprint Cars. ESPN's Thunder show covered live Sprintweek races at the track in the 1990s. It currently holds events on the Lucas Oil Late Model Dirt Series and World of Outlaws Sprint Car series. It has held races in the ARCA Series, USAC Sprint Cars, and USAC National midgets. It holds the annual Kokomo Klash race with headline classes sprint cars, midget cars, late models, and modifieds in October. 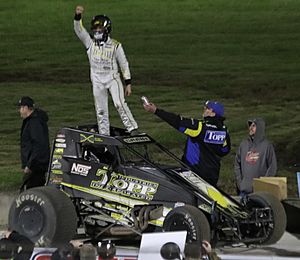 All content from Kiddle encyclopedia articles (including the article images and facts) can be freely used under Attribution-ShareAlike license, unless stated otherwise. Cite this article:
Kokomo Speedway Facts for Kids. Kiddle Encyclopedia.