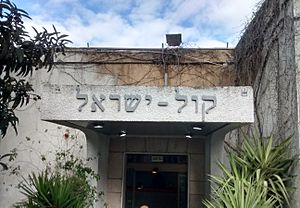 It operated as a division under the Israel Broadcasting Authority, until 14 May 2017, and the following day the frequencies were handed over to the Israeli Broadcasting Corporation.

All of Kol Israel's stations are available worldwide through streaming audio over the Internet. Both live broadcasts as well as archived programs are available to listeners. 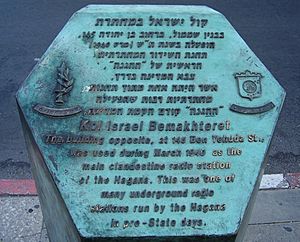 Kol Yisrael was originally an underground Haganah radio station that broadcast from Tel Aviv. It started consistently broadcasting in December 1947 under the name Telem-Shamir-Boaz, and was renamed to Kol HaHagana ("Voice of the Haganah") in March 1948.

With Israel's declaration of independence on May 14, 1948, it was transformed into the official station Kol Yisrael.

The first Kol Yisrael transmission was a live broadcast from Tel Aviv of David Ben-Gurion reading of the declaration of independence. It was operated by a department of the Ministry of the Interior responsible for domestic and international broadcasts. Responsibility for the service was later transferred to the Office of Posts and Telegraphs and then to the Prime Minister's Office.

All content from Kiddle encyclopedia articles (including the article images and facts) can be freely used under Attribution-ShareAlike license, unless stated otherwise. Cite this article:
Kol Yisrael Facts for Kids. Kiddle Encyclopedia.