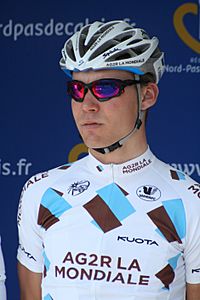 Kristof Goddaert (21 November 1986 – 18 February 2014) was a Belgian road racing cyclist. He competed as a professional between 2008 and 2014 for the Topsport Vlaanderen-Mercator, Ag2r-La Mondiale and IAM Cycling squads. He was born in Sint-Niklaas, Belgium.

Goddaert died was killed on 18 February 2014 during a training ride in Antwerp. He fell from his bike and was struck by a De Lijn bus. He was 27 years old.

All content from Kiddle encyclopedia articles (including the article images and facts) can be freely used under Attribution-ShareAlike license, unless stated otherwise. Cite this article:
Kristof Goddaert Facts for Kids. Kiddle Encyclopedia.