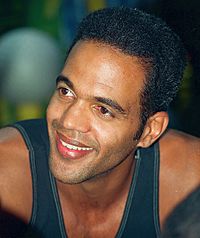 Kristoff St. John (July 15, 1966 – February 3, 2019) was an American actor. From 1991 to 2019, he played the role of Neil Winters on The Young and the Restless. He was nominated for eleven Daytime Emmy Award nominations, two Emmy Awards, and ten NAACP Image Awards for the role. He was born in New York City.

St. John was found dead in his Los Angeles, California home on February 3, 2019, aged 52. On March 19, 2019, it was announced that his death had been ruled accidental, with the cause listed as heart failure.

All content from Kiddle encyclopedia articles (including the article images and facts) can be freely used under Attribution-ShareAlike license, unless stated otherwise. Cite this article:
Kristoff St. John Facts for Kids. Kiddle Encyclopedia.